Currently, Jared Goff is flying solo at quarterback for the Lions. The team made the call to waive backup David Blough on Wednesday morning, Adam Schefter of ESPN.com tweets. 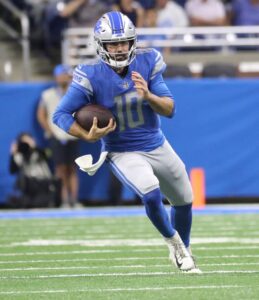 The Lions engaged in trade discussions with the 49ers, but the teams could not come to terms. After the 49ers decided to move on and give their third-string job to Mr. Irrelevant Brock Purdy, Sudfeld is now free to sign with the Lions.

As for Blough, who has been with the Lions since 2019, the team would like the Hard Knocks cast member to stay on as a practice squad arm, Schefter tweets. The former Purdue quarterback initially signed with the Browns as a UDFA but became a Lion via a late-summer trade three years ago. After making five starts as a rookie, Blough spent part of the 2020 season on Detroit’s practice squad. He was on the team’s active roster last season.

Sudfeld, 28, will join his fourth NFL team soon. While he has never made an NFL start in six seasons, the Indiana product’s cameo in Week 17 of the 2020 season — when he replaced Jalen Hurts late in a pivotal (though not for the Eagles) season finale — became rather controversial. Sudfeld has attempted 37 career passes, completing 25 of them (at 5.1 yards per attempt, however).

The former Washington UDFA spent much of his career as a Philadelphia third-stringer, who did rise to the position of Nick Foles‘ backup during consecutive Eagles playoff runs. Sudfeld landed in San Francisco last year. Jimmy Garoppolo‘s decision to accept the 49ers’ pay-cut offer changed the 49ers’ depth chart, pushing Purdy down to No. 3. Sudfeld could not secure that gig but looks to be moving to a No. 2 role soon.