The Falcons are adding Auden Tate to their wide receiver rebuild effort. The former Bengals pass catcher will head to Atlanta on a one-year deal, according to the team. 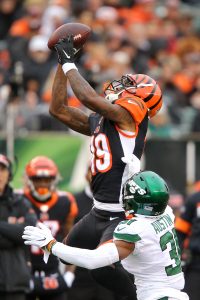 Tate is best known for his contributions during A.J. Green‘s full-season absence in 2019. Since, the former seventh-round pick has not seen much playing time. Green’s return capped Tate’s usage in 2020, and an injury prevented him from playing during much of Cincinnati’s AFC championship season.

The 6-foot-5 wideout caught 40 passes for 575 yards and a touchdown in 2019, joining Tyler Boyd as the top Bengals receivers with the team down Green and John Ross. With Green back in 2020 and Tee Higgins in the fold, Tate receded into the background and caught just 14 passes for 150 yards. The Florida State product ended both the 2020 and ’21 seasons on IR, reverting to the Bengals’ injured list late last season after returning to practice during the playoffs.

Just 25, Tate will join a Falcons receiving corps that will be without Calvin Ridley. Shortly after Ridley’s gambling suspension became known, top 2021 wideout Russell Gage defected to the Buccaneers in free agency. Atlanta will add more pieces to a position group currently fronted by Olamide Zaccheaus, but Tate is set to battle for playing time in the team’s first post-Matt Ryan receiving corps.

Despite returning to practice ahead of the Bengals’ wild-card game, Auden Tate will not be in uniform when the team takes the field for Super Bowl LVI.

Tate’s practice period expired Tuesday without a roster move, Field Yates of ESPN.com tweets. This means the veteran wide receiver will revert to IR, a move that ends his season. Tate has not played since Week 7.

A thigh injury led to Tate’s IR placement in early December. The fourth-year wideout had battled that issue in the weeks leading up to that move, but the former seventh-round pick did not play much of a role this season. Tate caught three passes for 39 yards and a touchdown this season.

A shoulder ailment ended Tate’s 2020 season, and an MCL sprain in December 2019 wrapped his most promising season. After catching 40 passes for 575 yards in 2019 — during a season A.J. Green did not play — Tate has compiled just 189 yards since.

The Bengals have invested significant draft capital in the receiver position, taking Tee Higgins in the 2020 second round and adding likely Offensive Rookie of the Year Ja’Marr Chase fifth overall this year. Tate, who is set for free agency in March, will likely attempt to bounce back with another team next season.