The Commanders have made a handful of moves heading into their season finale against the Cowboys, according to their official Twitter account. The team placed starting linebacker Jamin Davis on injured reserve, filling his open roster spot by activating tight end Armani Rogers from IR. Washington also announced it would be elevating cornerback Troy Apke and running back Reggie Bonnafon from the practice squad as standard gameday elevations. 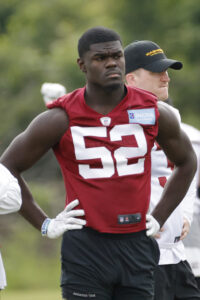 Davis will officially be held out of the team’s final contest as he deals with a knee injury that had him listed as questionable coming into the weekend. The Commanders’ leading tackler has started 15 of 16 games this season, contributing 104 total tackles, nine tackles for loss, three sacks, and five quarterback hits. With Davis absent tomorrow, backup linebacker Khaleke Hudson will likely slide into the starting spot in his place.

Rogers, an undrafted rookie who was used as a kind of Swiss Army knife at Ohio, appeared in 10 games for the Commanders, starting three, before being placed on IR with knee and ankle injuries. Washington brings back the versatile utility player just in time to end the season.

Apke is in his fifth season with the Commanders, spending this year on the practice squad after playing out his rookie contract. Apke will be elevated to potentially appear in his second game of the season and his second game in a row. Bonnafon could potentially make his Washington debut after three seasons in Carolina.

It looks like Jon Bostic will finish a second straight season on IR. The Commanders moved the veteran linebacker to their injured list Friday, sidelining him for four games. 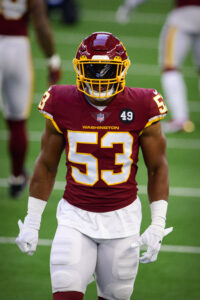 A pectoral injury will sideline Bostic, who has played in all 15 Washington games this season. It is unknown if Bostic suffered a significant pec injury, like he did last season. His previous such issue cost him 13 games in 2021.

This further depletes a Washington linebacking corps that is already without Cole Holcomb, the team’s top tackler last season. The contract-year defender has been out since Week 7 and has undergone foot surgery. Holcomb’s 446 snaps are still the second-most among Washington linebackers, behind only Jamin Davis‘ total. Bostic, who signed a one-year deal for the league minimum to return to D.C., has been on the field for 263 defensive plays this season.

The Commanders have used the 10th-year defender as a part-time starter; Bostic has started in five of the team’s past seven games and has totaled 25 tackles this season. Bostic, 31, has been with the team for the past four seasons. He made his way back to Washington late this summer, after his training camp agreement with the Saints did not lead to a spot on New Orleans’ 53-man roster.

Having seen game action for five teams since being a second-round Bears draftee in 2013, Bostic has made Washington his primary NFL stop. The ex-Florida Gator has started 40 games for Washington over the past four seasons. Washington also signed linebacker De’Jon Harris from its practice squad and signed cornerback Troy Apke to its taxi squad.

Today’s practice squad transactions from around the league:

Here are the day’s only practice squad moves:

Apke returns to Washington after being released just over two weeks ago. At his peak, Apke earned the starting free safety job for Washington over Sean Davis after filling in some during the prior year for injured starter Montae Nicholson. After struggling at the position, Apke lost the starting job and transitioned to cornerback. His role since losing the starting safety job has mostly been on special teams, where he had been a contributor earlier on in his career.