The injuries continue to pile up for the Giants. Per a team announcement, wide receiver Collin Johnson has suffered a torn Achilles. As a result, he will miss the entire 2022 campaign. 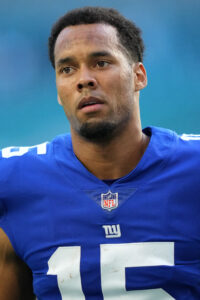 A 2020 fifth-round pick out of Texas, Johnson put up relatively modest numbers in college (with the exception of his junior season). Still, he carried significant intrigue due to his size; at six-foot-six and more than 220 pounds, he had the potential to operate as at least a contested-catch specialist in the NFL.

As a rookie with the Jaguars, Johnson made 18 catches for 272 yards and a pair of touchdowns. He finished the year on IR, however, and found himself on waivers the following September. With the Giants last season, he made just 11 scoreless catches in 12 games. Nevertheless, his performances in training camp and the preseason had him on track to retain a roster spot behind the likes of Kenny Golladay, Kadarius Toney, Sterling Shepard and rookie Wan’Dale Robinson.

Johnson will become the sixth Giant to land on IR already, but the team has quickly taken steps to replace him. New York is claiming wideouts Bailey Gaither and Jaylon Moore off waivers from the Ravens, per ESPN’s Field Yates (Twitter link). The pair have combined to make just seven regular season appearances, but could latch onto the end of the roster with Johnson’s injury.

Per Yates, the Giants also placed receiver Marcus Kemp on IR. The 27-year-old has made all but one of his regular season appearances with the Chiefs to date, playing almost exclusively on special teams. The Giants will head towards final roster cuts looking to avoid any further lengthy absences, while trying to fill out the backend of their WR depth chart.