Following a brief stint on the COVID-19 reserve list, Ben Roethlisberger will be under center tomorrow against the Bengals. The Steelers announced that they’ve activated their quarterback from the COVID-19 list. The team also activated offensive lineman Jerald Hawkins, running back Jaylen Samuels, and linebacker Vince Williams.

The four players didn’t test positive, but they were close contacts of tight end Vance McDonald, who had a positive test earlier this week. As a result, these players had to isolate for several days and test negative before rejoining the squad.

“I’m doing good,” Roethlisberger said (via Gerry Dulac of the Post-Gazette on Twitter). “I feel great. If my body enjoyed the week off, my mind teaching pre-kindergarten did not enjoy the week off. It’s fun to be home, but I definitely missed the guys.”

Naturally, the team is now making up for lost time in their preparation for Cincinnati. ESPN’s Jeremy Fowler tweets that Roethlisberger was expected to participate in the Steelers walkthrough this morning, with the team hoping to get their veteran quarterback some extra time on the practice field.

After being limited to only a pair of games in 2019, the 38-year-old has played a major role in the Steelers undefeated record in 2020. Roethlisberger has completed 68.1-percent of his passes (a mark that would be a career high) for 1,934 yards, 18 touchdowns, and four interceptions.

The Steelers have placed quarterback Ben Roethlisberger on the COVID-19 reserve list, per a club announcement. Running back Jaylen Samuels, offensive lineman Jerald Hawkins, and linebacker Vince Williams have also been added to the list. 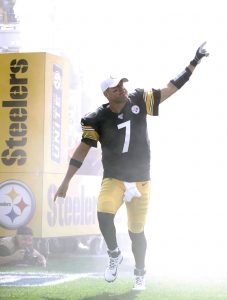 The news comes just hours after tight end Vance McDonald was parked with the same designation. Per league rules, each Steelers player will have to isolate for several days and test negative before rejoining the team.

Roethlisberger is not believed to have tested positive. Instead, he was deemed a high-risk, close contact, according to ESPN.com’s Adam Schefter (on Twitter). Depending on what happens from here, the QB may have a chance to start on Sunday against the Bengals.

Meanwhile, Big Ben is hoping to heal up from double knee injuries suffered against the Cowboys. Despite that setback, Roethlisberger and the Steelers won 24-19 and advanced to 8-0 on the year.

The Buccaneers have acquired offensive tackle Jerald Hawkins from the Steelers (Twitter link via Rick Stroud of the Tampa Bay Times). In the deal, the Bucs will swap positions with the Steelers in a late round of the 2020 NFL Draft.

Pittsburgh shipped Hawkins and a 2021 seventh-round pick to Tampa Bay in exchange for a 2021 sixth-round selection, Tom Pelissero of NFL.com tweets.

The deal amounts to a low-cost way to the Bucs to fortify their front five. Hawkins, a fourth-round pick in the 2016 draft, only has five career appearances and one start under his belt. Last year, he was slated to serve as Alejandro Villanueva‘s backup, but a quad tear wiped out his entire 2018 campaign.

Hawkins likely would have been cut by the Steelers, leaving his fate up to the waiver wire. Instead, he has secured a spot for Week 1, in a warm-weather destination. That’s not a terrible outcome for the Louisiana native and LSU product.