The Patriots have signed wide receiver Marvin Hall (Twitter link via NFL.com’s Ian Rapoport). Details of the deal were not disclosed, but it’s likely a low-cost, one-year deal for the speedy veteran. 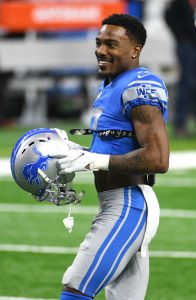 Hall, a 2016 undrafted free agent out of Washington, seemed to have found a home with the Lions in 2020. After wandering the league early in his pro career, he managed 17 catches for 290 yards and two scores across eleven games. But, in an effort to see more from their younger players, the Lions cut him loose in December, leading him to the Browns.

Hall — who previously suited up for the Raiders, Cardinals, Falcons, and Bears — enjoyed a breakout performance in Week 8, catching four passes for 113 yards. Now, he’ll compete for a spot in New England where Nelson Agholor, Kendrick Bourne, and Jakobi Meyers headline the WR group. Special teams standout Matthew Slater is likely to keep his spot, even if he doesn’t see much time on offense. That leaves Hall, N’Keal Harry, seventh-round pick Tre Nixon, Kristian Wilkerson, Gunner Olszewski, and Isaiah Zuber to battle for one or two remaining jobs this summer.

The Lions dropped Marvin Hall over the weekend, but he’s caught on with a new team. The Browns have claimed the 27-year-old wide receiver, per a club announcement.

Hall, a 2016 undrafted free agent out of Washington, seemed to have found a home in Detroit. After wandering the league early in his pro career, he managed 17 catches for 290 yards and two scores with the Lions in 2020. But, in an effort to see more from their younger players, the Lions cut him loose.

Hall — who previously suited up for the Raiders, Cardinals, Falcons, and Bears — enjoyed a breakout performance in Week 8, catching four passes for 113 yards. He’ll do his best to replicate that for the Browns, who are riding a four-game winning streak and pushing to end their longstanding playoff drought. Hall will have a chance to make his debut on Monday night, when the Browns take on the Ravens in Cleveland.

The Lions are moving on from Marvin Hall. Mike Garafolo of the NFL Network reports (via Twitter) that Detroit is planning to waive the wide receiver. The organization is hoping to give some of their younger players an opportunity in what’s turning into a lost season. On the other side, the 27-year-old receiver will have a great chance to catch on with a contender.

Hall, a 2016 undrafted free agent out of Washington, bounced around the league a bit to start his career, spending time with the Raiders, Cardinals, Falcons, and Bears. He seemed to find a home in Detroit, however. Hall appeared in nine games for the Lions last season, but he took on a larger role in 2020.

This season, the veteran has hauled in 17 receptions for 290 yards and two touchdowns in 11 games (five starts). He had a breakout performance in Week 8, catching four passes for 113 yards. In the following four games, Hall was on the field for more than half of Detroit’s offensive snaps.

With the Lions sitting with a 4-7 record, the team is starting to look towards next season. The team’s depth chart is already filled with veterans behind Kenny Golladay (a grouping that includes Marvin Jones, Mohamed Sanu, and Danny Amendola), but today’s move should provide more opportunities for the likes of Quintez Cephus and Jamal Agnew.