The Cowboys have designated defensive end DeMarcus Lawrence for return, as Doug Kyed of The Athletic tweets. The two-time Pro Bowler is back on the practice field today, and his 21-day activation window is officially open. 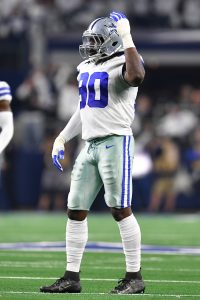 Per ESPN’s Ed Werder, Dallas is targeting next Thursday’s matchup with the Saints for Lawrence’s return to game action (Twitter link). Lawrence suffered a broken foot in practice after the club’s Week 1 loss to the Bucs, and he has been on injured reserve ever since.

Lawrence, 29, has yet to replicate the double-digit sack totals that he posted across the 2017-18 seasons, but he remains a key component of Dallas’ defensive front. He is a highly-effective run-stopper, and despite the drop-off in sack numbers, Pro Football Focus’ advanced metrics have consistently pegged him as a top-tier edge defender. His return, and the imminent returns of fellow D-linemen Randy Gregory and Neville Gallimore, will be a massive boost to the Cowboys’ playoff push.

Dallas has lost another defender to injury, however. The team announced that it has placed safety Donovan Wilson, who is dealing with chest and shoulder ailments, on IR.

Wilson, a 2019 sixth-rounder, started 10 games for the Cowboys last season, notching 71 tackles, 3.5 sacks, and three passes defensed. He suffered a groin injury in training camp this year and aggravated the injury in Week 1, which forced him to miss the next four games. He was gradually eased back into action, and he started both of Dallas’ last two contests. On the season, he has 18 tackles and a pass defensed, and he presently ranks as Pro Football Focus’ 46th-best safety out of 91 qualifiers.