The wide receiver and kicker positions are in flux in Indianapolis at the moment, so it comes as no surprise that each are being addressed with their two allotted practice squad elevations. Per a team announcement, the Colts are bringing up Keke Coutee and Chase McLaughlin to the active roster. 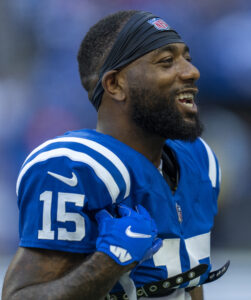 Coutee, 25, is continuing his Colts tenure which began last season. The former Texans fourth-rounder spent three years in Houston, setting career highs in receptions (33), yards (400) and touchdowns (three) in 2020. His 11.3 yards-per-catch average throughout his time with his first team made the slot man an intriguing candidate for a reserve/futures deal.

While the 5-11, 180-pounder was among the Colts’ final roster cuts before the start of the season, he returned to their taxi squad. That left the door open to him playing a potential rotational role, but he could see a significant workload tomorrow given the injuries to top wideouts Michael Pittman Jr. and Alec Pierce. Coutee will join Parris Campbell, Ashton Dulin, Mike Strachan, and Dezmon Patmon in trying to replace those two.

McLaughlin, meanwhile, has obviously gotten the nod over undrafted rookie Lucas Havrisik to step in for Rodrigo Blankenship. The latter was waived earlier this week, after his struggles greatly contributed to the Colts having to settle for a Week 1 tie. McLaughlin finished the 2019 campaign in Indianapolis, making five of his six field goal attempts. The team will look for him to replicate that level of success, after he went just 15-for-21 with the Browns last season.

The Colts will lean on Coutee and McLaughlin tomorrow as they look to get in the win column against the Jaguars. The pair could play their way into a full-time roster spot with encouraging performances at positions of need, making their contributions a storyline to watch.

Colts Cut Roster Down To 53

Indianapolis has made a couple headline moves, but, most notably, succeeded in trimming their roster down to 53 players today. Here are the moves that helped them get down to the limit today:

Activated from active/physically unable to perform:

The biggest stories of the day for the Colts come in the linebacking corps. In addition to adding star linebacker Leonard off the PUP, Indianapolis acquired second-year player Grant Stuard in a trade with Tampa Bay today. Stuard was primarily a special teamer with the Buccaneers last year, playing in every game as a rookie. He’ll go from one stacked linebacker room to another, likely backing up Leonard upon his arrival.

The Colts have quite an interesting rookie class. A sixth-round defensive tackle, Brooks is the only drafted rookie not to make the final roster besides sixth-round tight end Andrew Ogletree who will start his NFL career on injured reserve. None of this is spectacular, though. The interesting part is that Indianapolis will roster four undrafted rookies to start the 2022 NFL season.

Former SMU safety Trevor Denbow finds his way onto the initial 53 after leading the NFL this preseason with five special teams tackles. Cornerback Dallis Flowers can also thank his special teams value as his athleticism was supplemented by a 53-yard kickoff return to help him make the team out of Pitt State. Former Cornhusker JoJo Domann joins Leonard and Stuard in the linebackers room. And the French-Fries offensive line combination stays alive as Wesley French makes the final roster out of Western Michigan.

There were a number of other players who have special teams’ ability to thank for their roster spot in addition to Denbow and Flowers. Running back Deon Jackson played on all punt/kick return/coverage units for the Colts last year, earning him a tightly contested roster spot over Lindsay and Williams. Cornerback Tony Brown was the team’s highest-graded special teams player in the preseason, according to Pro Football Focus, and safety Rodney Thomas II played the third-most special teams snaps on the team.

Finally, the biggest performer of the Colts’ preseason was likely quarterback Sam Ehlinger whose stellar preseason led Indianapolis to roster three quarterbacks going into the season. The former-Longhorn’s impressive preseason play helped him earn a spot on the initial roster despite the Colts already rostering starter Matt Ryan and one of the league’s top backup quarterbacks in Nick Foles.

The Colts will have the opportunity tomorrow to announce any moves to form their 16-man practice squad. Players cut today who have not vested will have to clear waivers before returning to the team.

Quenton Nelson will end up spending the minimum number of games during his first IR stay. The Colts activated the All-Pro guard ahead of Sunday night’s game against the 49ers.

A high ankle sprain stopped the three-time All-Pro’s start streak at 51 to start his career. Nelson kept that run going despite having foot surgery during training camp. Although Indianapolis went 2-1 without its top lineman, this certainly qualifies as good news for the team’s prospects in its second nationally televised game in three weeks.

The Colts will not have Braden Smith available, however. Indy’s right tackle will miss a sixth straight game due to foot and thumb injuries. Unlike Nelson, Smith has not spent time on IR this season. Nelson returned to practice earlier this week. Nelson, 25, will continue his track toward what will almost certainly be a record-setting guard extension. The Colts extended fellow 2018 draftees Smith, Darius Leonard and Nyheim Hines earlier this year. Nelson, however, has an extra year remaining on his contract thanks to the fifth-year option.

The Colts made room for Nelson by placing Julian Blackmon on IR. The second-year safety suffered a torn Achilles’ tendon in practice this week. Former second-round pick Josh Jones, who joined the Colts’ practice squad this week, is now on the team’s active roster for its San Francisco trip. So is veteran wideout Keke Coutee. The Colts ruled T.Y. Hilton out earlier on Saturday. Hilton made his return from a neck injury last week, but he is now battling a quad ailment.

Texans Work Out Prosise, Halapio, Others

The Texans are looking into some veteran free agents. Running back C.J. Prosise, wide receiver Ryan Grant, quarterback Cody Kessler and center Jon Halapio were among the players who participated in a Texans workout Wednesday.

This marks Prosise’s second August workout; he auditioned for the Lions nearly two weeks ago. The former Seahawks running back showed promise as a rookie and remained with the team throughout his four-year rookie contract, but the former third-round pick could never carve out a consistent role.

Now 30, Grant has bounced around since his Washington run ended. The nixed Ravens agreement in 2018 ended up routing him to the Colts, with whom he saw his last significant game action. Grant caught 35 passes for 334 yards in 2018. The Texans have a veteran-heavy receiving corps — headlined by the Will Fuller–Brandin Cooks–Randall Cobb–Kenny Stills quartet — but are down Keke Coutee at the moment. The third-year wideout is batting a foot stress fracture.

The Patriots carried Kessler for part of last season but released him in April. He has not seen game action since starting four games for the 2018 Jaguars.

Halapio brings the most recent starting experience, having been the Giants’ starting center for 15 games in 2019. He was rumored as a player who could return to the Giants, but nothing has emerged on that front in a bit. The Giants non-tendered him as an RFA in March. Halapio, 29, entered the past two seasons as New York’s starting center, but a broken leg ended his 2018 slate early and an Achilles’ tendon tear knocked him out of a Week 17 game last season.