Bills safety Jordan Poyer ended his hold out last month, attending mandatory minicamp in order to avoid the roughly $90,000 in fines he would have been liable to pay for an unexcused absence. He’s also not likely to return to his hold out once camp begins for a similar reason, according to Vic Carucci of The Buffalo News.

Poyer had skipped OTAs in May after he had decided to push Buffalo for a contract extension. The deal would likely benefit both parties. Poyer would get a raise while the Bills would have an opportunity to lower Poyer’s cap hit and keep one of the NFL’s best safety tandems together for a few more years (as fellow safety, Micah Hyde, is under contract through next season).

If Poyer balked and ended his hold out at $90,000 to attend minicamp, it’s had to imagine that he would be willing to shell out the $50,000 daily fine that would hit him as a player not on a rookie contract missing camp. Poyer has recently doubled down on his assertion that he truly wants to remain in Buffalo, so moving forward in good faith puts the pressure on the Bills to provide him with a deal to keep him from walking at the end of the season..

Here are a few other rumors from out of the AFC East, specifically coming out of the Garden State:

Lamarcus Joyner is returning to New York. The veteran safety is re-signing with the Jets, reports ESPN’s Adam Schefter (via Twitter). It’s a one year-deal for Joyner.

After getting cut by the Raiders last offseason, Joyner caught on with the Jets. He started his lone game for New York, collecting one tackles in nine defensive snaps. Unfortunately, an elbow injury landed him on injured reserve, and he ended up sitting out the rest of the season.

Joyner entered the league as a second-round pick of the Rams back in 2014. After his rookie contract expired, he played 2018 under the franchise tag with the Rams. The Florida State product earned a big four-year, $42MM contract from the Raiders the following free agency, but he was released just two years into that pact.

Joyner played last season on a one-year deal that included $2.5MM in guaranteed money. Considering the injury, he probably had to settle for less this time around.

The Jets had a rough opener. They lost to the Panthers 19-14, and also lost starting tackle Mekhi Becton for at least the next month. But the 2020 first-rounder wasn’t the only New York starter to go down against Carolina.

Safety Lamarcus Joyner suffered a torn tendon in his arm that will require surgery, a source told Ian Rapoport of NFL Network (Twitter link). The injury “likely knocks him out for the season,” Rapoport writes. It’s a tough blow for a Jets secondary that already profiled as one of the team’s weaknesses. Their group of corners are quite young and inexperienced, and now they’ll be forced to move things around at safety.

Joyner entered the league as a second-round pick of the Rams back in 2014. After his rookie contract expired, he played 2018 under the franchise tag with the Rams. The Florida State product earned a big four-year, $42MM contract from the Raiders the following free agency but was released back in March just two years into that pact.

Shortly after getting cut by Vegas he inked a one-year deal with the Jets worth up to $4.5MM with $2.5MM guaranteed. $1.5MM of that was in playing time incentives that it now appears he won’t be able to meet. Joyner turns 31 in November, so he probably won’t be able to count on a huge payday next spring.

The Raiders will kick off their regular season on Monday Night Football against the Ravens tomorrow. In the meantime, let’s round up a few recent items on the Silver-and-Black:

The Jets drafted Ashtyn Davis in the 2020 third round and are moving recent acquisition Lamarcus Joyner back to safety, where he has fared best as a pro. But the team used its franchise tag on Marcus Maye. Robert Saleh does not want that transaction to precede Maye departing in 2022. 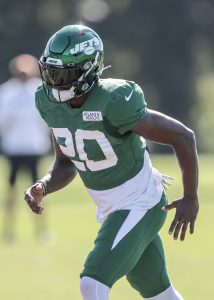 Saleh said (via ESPN.com’s Rich Cimini) he spoke with Maye before the offseason program started and that the Jets’ front office is “working relentlessly” to hammer out an extension for the fifth-year safety.

Joe Douglas said earlier this week keeping Maye in the fold long-term was a priority. Although, the third-year GM previously viewed Jamal Adams as a cornerstone piece; and Maye’s agent made noise earlier this year by voicing frustration about the team’s lack of progress on an extension. The Jets also drafted two safeties — Auburn’s Jamien Sherwood in Round 5 and Florida State’s Hamsah Nasirildeen in Round 6 — this year.

Maye’s arrival precedes Douglas’, with previous Jets GM Mike Maccagnan selecting the Florida alum in the 2017 second round. While Adams received greater accolades during their run together, Maye has been a four-year starter. Saleh did not express any concerns about Maye being a fit for his system. The former 49ers DC appears to be envisioning a Maye-Joyner back-line tandem, Cimini adds. Joyner came over from the Raiders, who cut him after stationing him at slot cornerback for two seasons.

The Broncos further raised the bar for this position this offseason, making Justin Simmons the NFL’s first $15MM-per-year safety. Five other safeties are signed to deals worth at least $14MM per year annually. While Maye has yet to make a Pro Bowl, he is undoubtedly shooting for a contract in this range. He graded as Pro Football Focus’ No. 5 safety last season. The Jets have until July 15 to finalize an extension, or Maye will play the season on the $10.6MM safety tag.

Lamarcus Joyner is heading to New York. The veteran safety is signing with the Jets, reports NFL.com’s Ian Rapoport (via Twitter). The reporter adds that it’s a one-year deal worth $4.5MM.

The Jets have been searching for some reinforcement at safety over the past week. Outside of Marcus Maye and Ashtyn Davis, the Jets had no depth at the position, so Joyner will certainly contribute with his new team. As Rapoport notes, Joyner seemingly made it a priority to find a team that would let him play safety. The veteran spent the 2020 campaign playing nickel with the Raiders.

Joyner ultimately spent two seasons with the Raider, starting 16 of his 28 games. He finished the 2020 season 66 tackles and five passes defended in 14 games (six starts). He appeared in 62 percent of his team’s defensive snaps last season.

The 2014 second-round pick spent the first five seasons of his career with the Rams organization, hauling in four interceptions in 27 starts between the 2017 and 2018 seasons.

The Raiders will clear a sizable chunk of cap space Monday. They plan to release Lamarcus Joyner, according to NFL.com’s Ian Rapoport (on Twitter).

Previously rumored, this move will save Las Vegas $8.7MM. That would bump the Raiders to north of $10MM in cap space. Joyner marks the third key contributor the Raiders have parted ways with over the past few days, with starting guards Gabe Jackson and Richie Incognito out the door as well. This news also comes after a report indicated the Raiders are shopping another of their big-ticket 2019 additions (Trent Brown). They have already cut fellow 2019 signee Tyrell Williams.

Signed to a lucrative deal two years ago, Joyner did not work out as a Raider. After excelling at safety with the Rams, Joyner moved to the slot primarily with the Raiders. Pro Football Focus graded him outside its top 80 corners in each of his two seasons with the Raiders, who will again enter a free agency period needing some coverage help.

Joyner has done well for himself financially over the past three seasons, playing on the franchise tag in 2018 and having signed a four-year, $42MM deal in the spring of ’19. Now 30, Joyner will have to settle for a less enticing salary in 2021 in order to continue his career.

The Raiders narrowly missed the playoffs in 2020, and their defense was largely to blame for that. The unit finished near the bottom of the league in terms of total defense and points per game, and Vegas hopes that new defensive coordinator Gus Bradley and an influx of new talent will lead to an improved showing in 2021.

As Vic Tafur of The Athletic writes, the Raiders can free up about $48MM of cap room with a series of cuts that shouldn’t be too difficult to make — they already plan to release WR Tyrell Williams — and they can allocate some of those funds (along with the No. 17 overall pick, perhaps) to the defensive side of the ball. One of the players that is expected be let go is defensive back Lamarcus Joyner.

Indeed, Tafur says “there is no way” that Joyner, 30, will return to the team on his 2021 salary of $9.6MM. Releasing him would save Vegas about $8.7MM in cap space, and when one considers the value of that space versus Joyner’s performance over his first two years in the Silver-and-Black, it stands to reason that the Raiders would want to part ways.

GM Mike Mayock signed Joyner as an unrestricted free agent in March 2019, giving the former Ram a four-year, $42MM contract. That did not turn out to be one of Mayock’s better decisions, as Joyner — who primarily played safety with the Rams but who has become Vegas’ top nickel corner — has generally struggled. As Tafur candidly remarks, Joyner has “made like five plays in two seasons,” and Pro Football Focus is not much higher on him. The advanced metrics ranked the Florida State product as the 89th-best CB in the league in 2020, out of 121 qualified players. While player and team could theoretically come to terms on a pay cut, Tafur says that doesn’t seem overly likely either.

In Tafur’s estimation, Mayock should use the No. 17 overall selection on one of this year’s top collegiate pass rushers while using some of his free agent dollars on an established safety like Denver’s Justin Simmons.