Veteran defensive end Ifeadi Odenigbo will join the Colts. A Monday agreement, per Tom Pelissero of NFL.com (on Twitter), will send the former Vikings starter to Indianapolis. 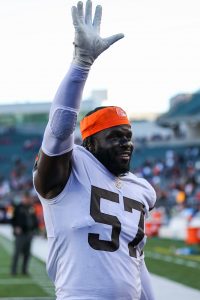 Odenigbo accumulated seven sacks as an off-the-bench edge rusher in 2019, when he played behind Danielle Hunter and Everson Griffen, but could not match that production as a starter in 2020 (3.5 sacks). He will join a Colts defensive end stable now anchored by trade acquisition Yannick Ngakoue, who was briefly Odenigbo’s teammate in Minnesota.

Originally a Vikings seventh-round pick in 2017, Odenigbo first saw action with the Cardinals in 2018. The Northwestern alum made his way back to Big Ten country later in 2018, rejoining the Vikes and sticking around via reserve/futures contract. Odenigbo graduated off the futures-deal tier in 2019 and signed a one-year, $2.5MM deal with the Giants in 2021. The Giants, however, cut him before the season began. That resulted in a Browns agreement — three years after a Cleveland practice squad stay — and a nine-game role as a backup.

The Colts lost D-end contributor Al-Quadin Muhammad this offseason, when the veteran followed Matt Eberflus to Chicago. Former second-round pick Kemoko Turay is also gone, having signed with the 49ers. Odenigbo stands to compete for a job behind Ngakoue and 2021 first-rounder Kwity Paye. He will join a cast of former second-round picks in doing so.

Despite the Giants signing Ifeadi Odenigbo early in free agency, they did not find room for the veteran pass rusher on their 53-man roster. The Giants are cutting the former Vikings starter, Jordan Raanan of ESPN.com tweets.

Odenigbo started last season with Minnesota and was effective off the bench in 2019, posting seven sacks that year. The former seventh-round pick registered 10.5 sacks over the past two seasons.

The Giants guaranteed Odenigbo $1MM, so that will go as dead money on their 2021 cap sheet. The team had dropped Odenigbo to its third-team defense, with lower-profile rushers surpassing him on the depth chart. While the Giants continue to have questions about their outside linebacker position, the ex-Viking defensive end will not be a part of Big Blue’s pass-rushing effort.

Recent second-day draft choices are in position lead the Giants’ edge corps, which has not housed a big-name presence since the Olivier Vernon trade. The Giants have former third-rounders Lorenzo Carter and Oshane Ximenes and second-round rookie Azeez Ojulari set to spearhead their outside linebacker group.

Ifeadi Odenigbo is heading to the Big Apple. The defensive lineman is signing with the Giants, according to his agency on Twitter. It’s a one-year pact for Odenigbo. The deal is worth $2.5MM, according to NFL.com’s Tom Pelissero (on Twitter). 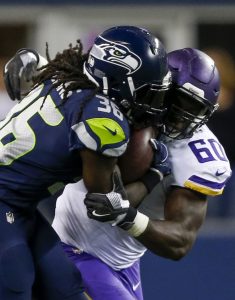 After bouncing around the NFL a bit to start his career, Odenigbo broke onto the scene in 2019 with the Vikings. The defensive lineman ultimately finished the campaign having compiled 23 tackles, seven sacks, and one forced fumble despite appearing in only 34 percent of his team’s defensive snaps.

The 26-year-old took on a starting role in 2020, compiling 35 tackles and 3.5 sacks in 15 games (15 starts). Despite his starting role, he was non-tendered by Minnesota earlier this week.

Now, Odenigbo will enjoy a bit of a homecoming with his new squad. The defensive lineman was born in Bayonne, New Jersey, about a 20-minute drive from MetLife Stadium.