The Bears announced that they have called off their agreement with defensive tackle Larry Ogunjobi. Per the club’s press release, Ogunjobi failed his physical. 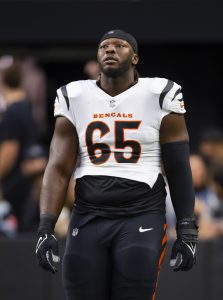 “As I said before, Larry Ogunjobi embodies everything we are looking for in a Bear,” GM Ryan Poles said in a statement. “He is a special person and player. During the league’s negotiating window earlier this week, we agreed to terms with him, subject to him passing a physical here. After a standard and thorough physical and medical review with Larry yesterday afternoon, our medical team deemed him to have failed his physical and, therefore, unfortunately, we are not signing him today. This is difficult and it is emotional for everyone involved, but ultimately is what is in the best interest of protecting the Chicago Bears.”

Ogunjobi spent his first four seasons with the Browns before moving on to the Bengals last year. In 2021, he notched 49 tackles and seven sacks in 16 games. The investment in Ogunjobi – along with the likes of Trey Hendrickson and Chidobe Awuzie – paid off as the Bengals won the AFC North for the first time since 2015.

Unfortunately, his season was brought to a halt with a right foot injury before the divisional round. That same foot injury seems to have cost him his contract with Chicago.

With the ex-Bengal ruled out, the Bears have agreed to sign former Chargers defensive tackle Justin Jones (Twitter link via Jeremy Fowler of ESPN.com). Jones, who graded out as a top-40 interior defensive lineman in 2020 per Pro Football Focus, will join the Bears on a two-year deal.

The Chargers will have one of their starting defensive linemen back for their Week 8 matchup against the Patriots. They moved Justin Jones from their IR list to the active roster Saturday. To make roster space, the team waived defensive lineman Forrest Merrill.

A two-year starter at defensive tackle, Jones has played in just one game this season. The interior D-lineman stands to provide a boost for a Bolts team that is aiming to return to the playoffs for the first time since 2018.

A calf injury sidelined Jones in September, though the Chargers appeared to expect him back sooner. They did not place the fourth-year defender on IR until early October. The additional rest, however, proved beneficial. The Chargers will now have their combo of Jones, Linval Joseph and former first-rounder Jerry Tillery healthy as they attempt to shake off a blowout loss to the Ravens.

Pro Football Focus graded Jones as a top-40 interior D-lineman last season. The former third-round pick is in a contract year. Although the Bolts have Kenneth Murray on IR, only four players appear on their Week 8 injury report. That is certainly a good sign at this point in the season.

As they attempt to snap a four-game losing skid, the Chargers will have some reinforcements back. They activated defensive linemen Melvin Ingram and Justin Jones off IR on Saturday.

Ingram has been out since Week 2 with a knee injury. This year’s tweaked IR policy allows teams to shelve players for just three weeks, and the longtime Bolts defensive end will miss the minimum number of contests before returning to team with Joey Bosa on the edge.

This stretch of games will be key for Ingram, who lobbied for a new contract but failed to secure it during a brief training camp hold-in. The Bolts extended Ingram in 2017, and his contract expires at season’s end. Bosa signed an NFL-high (for defenders) $27MM-per-year deal in August, topping Ingram’s $16MM-AAV deal as the top Chargers contract.

It will be difficult for the Bolts to give Ingram a major raise ahead of his age-32 season in 2021, though Justin Herbert‘s rookie contract will make that easier than it would have been with Philip Rivers‘ deal on L.A.’s books. But Ingram showing good form in his team’s final 11 games would strengthen his bargaining position in free agency.

A third-year defensive tackle, Jones will also miss the minimum number of games. He went down with a shoulder injury. The Chargers have used the 2018 third-round pick as a starting defensive tackle over the past two seasons.

The Chargers have once again been one of the most banged up teams in the league, but it looks like reinforcements are on the way. Los Angeles has designated defensive end Melvin Ingram and defensive tackle Justin Jones to return from injured reserve, Tom Pelissero of NFL Network tweets.

Each can now return to practice. The team now has a three-week window to activate either player. If they are not activated in that span, they’ll be ineligible to return for the remainder of the year. Ingram usually forms one of the league’s best pass-rushing duos with Joey Bosa when healthy, and he’s made the Pro Bowl in each of the past three seasons. Jones, a 2018 third-round pick, is a starter and key run-stuffer.

With guys like Derwin James and Chris Harris sidelined, the Chargers could really use this boost on defense. They’re 1-4 on the year and have blown 17-point leads in back to back weeks. Despite the record the Chargers still have a legit chance, as Justin Herbert has looked like a star in the making and the schedule coming up is extremely soft. Their next five games are against the Jaguars, Broncos, Raiders, Dolphins, and Jets, so if the defense can heal up they’ve got a shot to make some noise.

Ingram has only played in the first two games of the season, and he had a crucial interception in a Week 1 win over the Bengals. The South Carolina product has at least seven sacks in each of the past five seasons. He’s dealing with a knee issue, while Jones has a shoulder injury.