The first kicker is off the board. The Browns used pick No. 124 to select LSU kicker Cade York.

Alongside Tennessee’s Cade Mays, York was considered to be one of the best kickers in the draft. The LSU product firmly established himself as an NFL prospect in 2021 after connecting on 15 of his 18 field goal attempts and all 39 of his extra point tries. This followed a 2020 campaign where York connected on 85.7 percent of his field goals and 100 percent of his extra points.

This is the highest a kicker has gone off the board since 2016, when the Buccaneers selected Roberto Aguayo in the second round.

The Browns relied mostly on Chase McLaughlin as their kicker in 2021. The 26-year-old saw time in 16 games, but he only connected on 71.4 percent of his field goal attempts (15 for 21). He did, however, make 36 of his 37 extra point tries. The Browns re-signed McLaughlin back in March, so a kicking competition is surely coming.

For the second day in a row, the Browns have made a move with respect to their special teams. The team announced on Tuesday that they have re-signed kicker Chase McLaughlin.

McLaughlin originally entered the league when he signed with the Bills as a UDFA in 2019. He actually made his debut with the Colts, however, spending four games in Indianapolis. That was followed by another four contests with the Chargers, and three with the 49ers to end a busy rookie campaign.

The soon-to-be 26-year-old then found himself kicking for two new teams in 2020. He was with the Jaguars for three games, and the Jets for one more that year. Between his five stops prior to Cleveland, he made 22 of 28 field goal attempts, good for a success rate of 78.6%.

In Cleveland (who was awarded the Illinois alum off waivers), McLaughlin spent a full season with one team for the first time in the pros. He had a down year compared to his career averages, though, making 15 of 21 field goals (71.4%). He did, on the other hand, make all four of his kicks from beyond 50 yards, and only missed one of 37 extra point attempts.

With McLaughlin back in the fold, the Browns’ kicking unit appears set. They already have long snapper Charley Hughlett under contract for one more season, and added punter Corey Bojorquez yesterday.

The Browns have added some more competition for Cody Parkey. Cleveland was awarded Chase McLaughlin off waivers from the Jets, Field Yates of ESPN.com tweets. 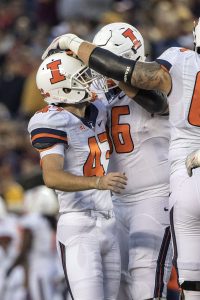 The Jets had claimed McLaughlin off waivers themselves from the Jaguars last December. He’s already bounced around a remarkable portion of the league considering he only entered the NFL as an UDFA in 2019. Despite playing just two seasons, McLaughlin has already spent time with the Bills, Vikings, Chargers, 49ers, Colts, Vikings (again), Jaguars, Jets, and now Browns.

He’s now played for a fourth of the league, and only just turned 25. Most of those stints were obviously short, and a few were just on the practice squad or during the preseason. As far as regular season action goes, McLaughlin kicked in a few games for the Colts, Chargers, and 49ers all in 2019. He then kicked in three for the Jags last year and one for the Jets.

In his career, the Illinois product is 22/28 on field goals and 31/32 on extra points. Parkey was solid but not spectacular in his first year in Cleveland in 2020, making 19 of 22 field goals and 43 of 47 extra points. The Browns never even had him attempt one from beyond 50 yards. They also currently have Matthew McCrane on the offseason roster.