Christian Jones is heading back to Chicago. The free agent linebacker is signing with the Bears, the team announced on Twitter. Terms of the deal haven’t been reported. 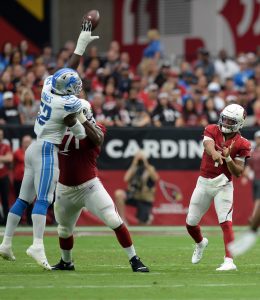 The 2014 undrafted free agent out of Florida State spent the first four seasons of his career with the Bears, starting 31 of his 63 appearances. The linebacker eventually evolved into one of Chicago’s most reliable defenders, culminating in a 2017 campaign where he finished with career-highs in tackles (90), QB hits (three), and sacks (two).

That performance earned him a two-year, $6.35MM deal with the Lions in 2018, and he eventually added another year to the pact via an extension. In total, Jones spent three seasons in Detroit, appearing in 45 games (42 starts). He saw time in 16 games (13 starts) this past season, collecting 57 tackles and no sacks.

Now, Jones will be heading back to Chicago, and there should still be some familiar faces. For instance, defensive coordinator Sean Desai was around during Jones’ first stint with the organization, serving as the defensive quality control coach. Jones was also teammates with one of the players he’ll likely be backing up, linebacker Danny Trevathan.

The Lions have released center Russell Bodine and linebacker Christian Jones, per a club announcement. In a related move, the Lions have also re-signed defensive back Mike Ford.

The Lions will save just over $3.5MM between the two moves. Jones, the more expensive of the two, was set to earn $3.17MM this year — instead, Detroit will gain $2.55MM in additional flexibility. Jones hooked on with the Lions before the 2018 season and wound up starting all 16 games in Matt Patricia’s first year as coach. Then, midway through the 2019 season, he was re-upped on a two-year extension. He now exits with 177 tackles and three sacks across three seasons as a Lion.

Bodine, 29, opted out of the 2020 season at a time when he could have competed for a reserve spot behind interior linemen Joe Dahl, Frank Ragnow, and Jonah Jackson. A 2014 fourth-round pick by the Bengals, Bodine started 64 consecutive games for Cincinnati . He went on to appear in ten games for the Bills in 2018, but didn’t play an NFL snap in 2019, so he’s two years removed from live action.

The Lions are set to have an opportunity to see their top running back in action two more times this season. They are activating Kerryon Johnson from IR in advance of their Week 16 game in Denver, Field Yates of ESPN.com tweets.

Johnson has been out since Week 7 with a knee injury. He returned to practice nearly three weeks ago and will be back on Detroit’s 53-man roster. With Johnson having spent much of his career on IR, these two lower-stakes (for the Lions) games will take on greater importance for the second-year running back.

This move appears to come with some risk, especially in a lost season. The 2018 second-round pick missed six games as a rookie with a knee injury. Johnson, who’s played in six games this season, remains the Lions’ top backfield investment and figures to go into 2020 as the team’s starter. But given the Auburn alum’s injury issues, these two games could help determine whether the team opts to add backfield competition next year.

This season has obviously not gone well for Johnson, whose yards-per-carry average dropped to 3.3 from the 5.4-yard mark he posted as a rookie. He’s totaled 434 yards from scrimmage in 2019. The Lions have seen considerable backfield turnover this season and have recently used second-year back Bo Scarbrough as their starter.