Kerryon Johnson is back in Philly. Following a brief stint with the organization earlier this season, the running back is rejoining the Eagles’ practice squad, according to Jeff McLane of the Philadelphia Inquirer (on Twitter).

With Miles Sanders sidelined and Jordan Howard banged up, the Eagles were looking for some healthy bodies to pair with Boston Scott and Kenneth Gainwell. So, they turned to Johnson, who spent much of the offseason with the organization. The running back landed on IR before being granted his release, and he managed to later catch on with the 49ers, appearing solely on special teams.

After three years in Detroit, Kerryon Johnson has gone through a more complicated 2021. The former second-round pick has been with three teams this year, with more looming on the radar at various points.

The Packers joined the latter contingent, bringing in the ex-Lions starter for a workout. Green Bay has run into another Aaron Jones MCL issue, creating a temporary need in its backfield.

Once the new Lions regime waived Johnson earlier this year, the Eagles claimed him. The Dolphins had submitted a claim as well. Philly, however, cut ties with the ex-Auburn standout in August. Johnson landed in San Francisco in September, amid the 49ers’ early-season injury struggles at running back, but barely lasted into October with the team. He has also met with the Raiders and Washington this year.

Green Bay is set to use A.J. Dillon as its starter during Jones’ absence, with second-year UDFA Patrick Taylor residing as the other running back on the 8-2 team’s active roster. Kylin Hill is on IR, with a knee injury knocking the Mississippi State rookie out for the season. The Packers have Ryquell Armstead and 2019 seventh-rounder Kerrith Whyte on their practice squad. Johnson, who rushed for 641 yards in 10 games as a rookie, played in one game for the 49ers this season.

D’Onta Foreman has made multiple trips for workouts this week. The former third-round pick is auditioning to return to the Titans on Wednesday, Sports Talk 790’s Aaron Wilson tweets.

This comes a day after Foreman logged a Washington workout. The ex-Texas Longhorn has not been able to establish himself as a consistent pro, but he has remained a presence on the workout circuit and saw time with the Titans last season.

Serving as one of Derrick Henry‘s backups in 2020, Foreman rushed for 95 yards on 22 carries in his six-game Tennessee run. In the two seasons prior to that, Foreman played just one game. For his career, Foreman has just 107 carries.

This marks the second time in two months Foreman worked out with Washington, which also auditioned Kerryon Johnson on Tuesday. Antonio Gibson is playing through a shin injury — one ESPN.com’s Adam Schefter categorized as a hairline fracture. Gibson has played through that and a shin-area bruise this season and has yet to miss a game.

Tennessee activated 2020 third-round pick Darrynton Evans ahead of its Week 7 game, but the Appalachian State product has battled injuries as a pro. Evans has played in just six games since being a Day 2 pick. The 49ers released Johnson from their practice squad earlier this month.

Raheem Mostert Out For The Year, 49ers Signing Kerryon Johnson To PS

Unfortunate news for 49ers fans. It appears running back Raheem Mostert won’t be returning in a couple of months after all. Instead, Mostert will have surgery on his knee that will sideline him for the rest of the season, he announced himself on Twitter. 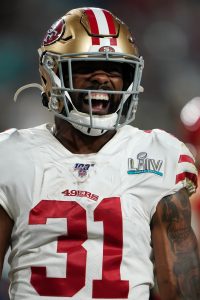 In a responsive move, the 49ers will be signing free agent running back Kerryon Johnson to their practice squad, Adam Schefter of ESPN.com tweets. Johnson, a 2018 second-round pick of the Lions, was cut by the Eagles last month. He also visited with the Raiders last week, and is still only 24. Johnson operated as the Lions’ lead back for his first two years in the league, but took a backseat to D’Andre Swift last year and was soon jettisoned.

Mostert says that he weighed his options and ultimately determined this was the best course of action. 49ers head coach Kyle Shanahan had said yesterday that Mostert would only undergo a scope for chipped knee cartilage, and that he would return in about eight weeks. He’ll instead have cartilage repair surgery that will have a six-month recovery, Tom Pelissero of NFL Network tweets. That should at least give him plenty of time to be 100 percent for the start of 2022.

It looks like the backfield will now be Elijah Mitchell‘s to lead going forward. Mitchell got 19 carries in the 49ers’ win over the Lions after Mostert went down, turning them into 104 yards and a touchdown. Fourth-round rookie Trey Sermon, who was a healthy scratch in Week 1, could get a crack at some point as well.

It’s a tough blow for Mostert, who has been an extremely effective runner when healthy but has struggled to stay on the field. He’s averaged a ridiculous 5.7 yards per carry on 284 career attempts, but injuries limited him to eight games last year and held him back in prior years as well. It’s especially tough considering Mostert is in a contract year, and will be an unrestricted free agent this spring.

It’ll be very interesting to see what kind of contract he lands in free agency. On the one hand he’s been remarkably efficient the past few years, but on the other hand has been plagued by injuries and has played in Shanahan’s system, in which virtually every running back seemingly thrives.

The Raiders are apparently serious about looking for veteran running back help. We heard yesterday that Las Vegas brought in free agent rusher D’Onta Foreman, and he apparently wasn’t the only one.

The Raiders also hosted Kerryon Johnson yesterday, Tom Pelissero of NFL Network tweets. It’s the first we’ve heard of Johnson since he was cut by the Eagles with an injury settlement back on August 26th. The 43rd overall pick of the 2018 draft by the Lions, Johnson’s stock has dropped sharply the past couple years. He shined as a rookie, carrying the ball 118 times for 641 yards (5.4 YPC) in 10 games while adding 32 catches.

He was Detroit’s starter in 2019, but missed eight games due to injury. After undergoing knee surgery he quickly fell out of favor with the team, and was buried behind D’Andre Swift on the depth chart. He played in all 16 games in 2020, but got only 52 carries. Waived back in May, he was promptly claimed off waivers by Philly.

He then got hurt in camp with the Eagles, and found himself cut once again. Johnson only turned 24 in June, so he shouldn’t be out of chances by now. The Raiders are a bit thin in their backfield with Jalen Richard on injured reserve, which explains their interest.

Kerryon Johnson is a free man. ESPN’s Field Yates reports (via Twitter) that the Eagles have waived the veteran running back from IR with an injury settlement. This means Johnson is now free to sign elsewhere.

The former second-round pick was waived by the Lions earlier this offseason, and he was quickly scooped up by the Eagles. The 24-year-old was expected to have some kind of role behind Miles Sanders, but a knee injury quickly derailed those plans. Johnson suffered the injury earlier this month, and after getting waived by the organization, he reverted to Philly’s IR.

Had Johnson remained on IR through the start of the regular season, he would have been ineligible to play for the Eagles this season. With today’s move, Johnson will now have an opportunity to play elsewhere in 2021.

Considering the running back’s youth and experience, there’s a good chance he’ll find another gig. Johnson spent three seasons in Detroit, including a rookie campaign where he collected 854 yards from scrimmage and four touchdowns. However, he struggled to match that production in 2019 and 2020, and he was limited by injuries in both 2018 and 2019 (and, now, 2021).