Eagles head coach Nick Sirianni confirmed that running back Miles Sanders broke a bone in his hand yesterday (Twitter link via Jeff McLane of the Philadelphia Inquirer). That’ll rule him out for this week’s game against Washington, but there’s hope that he’ll be able to return sometime after that. 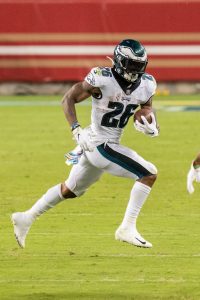 The Eagles cruised to a 34-10 win over the Giants yesterday, thanks in part to an efficient showing from Sanders. Before his early exit, the 24-year-old tallied 45 yards off of just seven carries. And, just last week against WFT, Sanders amassed 131 yards off of 18 totes. Through 12 games, Sanders has averaged 5.5 yards per carry, the highest mark of his young career.

At 8-7, the Eagles control their own destiny. They can clinch their playoff spot with wins over Washington and Dallas, but it’ll be a little tougher without Sanders. In the interim, they’ll lean on rookie Kenneth Gainwell, Boston Scott, and Jordan Howard to keep the chains moving. Howard was also taken out of yesterday’s game with a stinger, but Sirianni says he could be cleared to play before Sunday afternoon.