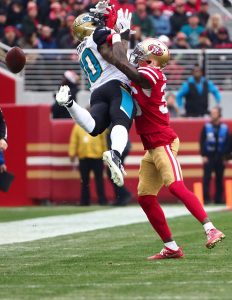 Johnson and the 49ers are quite familiar with each other at this point. The Niners selected the NC State product in the fourth round of the 2014 draft, and he was a full-time starter for the club as recently as 2017. But he has become something of a nomad, and in 2019 alone, he’s spent time with the Chiefs, Chargers, and 49ers. He played in two games for the Chargers before being cut, and San Francisco promptly scooped him up. He primarily served as a special teams contributor in his five games with the 49ers before they cut him last month.

He may see a little more action on the defensive side of the ball for the next couple of weeks, but it would still be surprising to see him get a ton of snaps. Meanwhile, fellow corner Jason Verrett, who has been on IR since Week 4, is eligible to return if the 49ers want to open his practice window.

After the Johnson signing was reported, we learned that the 49ers are also reuniting with WR Jordan Matthews, per Matt Barrows of The Athletic (via Twitter). Matthews signed a one-year, $1.8MM contract with the team this offseason, though he did not survive final cuts. He was brought back to San Francisco in early October but played in just one game and did not record a catch. He then caught on with Philadelphia and played in two games for the WR-needy Eagles before they parted ways with him.

The 49ers put Marquise Goodwin on IR yesterday, so Matthews will take his roster spot, but as the sixth WR on the roster, he’s unlikely to see much playing time. Adam Schefter of ESPN.com tweets that the team formally placed Weston Richburg on IR, opening up space for Johnson.

Jordan Matthews‘ third stint with the Eagles is over. Philadelphia made the decision to waive its on-again, off-again wide receiver on Monday.

An Eagle from 2014-16, Matthews caught on with his original NFL team in 2018 and again this season. This reunion did not produce much statistically. The sixth-year veteran caught four passes for 33 yards, serving as insurance for an injury-battered Philly wideout corps.

DeSean Jackson has missed most of this season, and Alshon Jeffery missed another game on Sunday. The Eagles lost to the Seahawks, dropping to 5-6. They did so with a wideout skeleton crew. This latest Matthews departure could point to Jeffery being ready for Week 13.

The 27-year-old wideout has not recaptured the form he showed during his first Philadelphia stay, when he surpassed 800 yards in three straight seasons. He also failed to make an impact in Buffalo, following a 2017 trade, or San Francisco. Given Matthews’ history with the Eagles, it cannot be assumed he’s done with the franchise. But Philly’s Week 13 crew against Miami is not set to include him.

The Eagles have agreed to sign wide receiver Jordan Matthews after working him out on Tuesday, a source tells Ian Rapoport of NFL.com (Twitter link).

Matthews began his career in Philadelphia after entering the league as a second-round pick in 2014. The Vanderbilt product went on to post the best three seasons of his NFL tenure, averaging 75 receptions, 891 yards, and six scores per year. The Eagles shipped Matthews to the Bills as part of the Ronald Darby trade in advance of the 2017 campaign, and he’s bounced around ever since.

Matthews landed with the Patriots in 2018, but he was released with a settlement after suffering a knee injury. The now-27-year-old then started his second stint in Philadelphia, but played sparingly and managed only 20 receptions for 300 yards. This year, Matthews has already had two stints with the 49ers, and was most recently released in late October.

The Eagles’ offense has struggled since losing DeSean Jackson in Week 1; Jackson was just placed on injured reserve, so he won’t be returning this season. Matthews certainly isn’t a like-for-like replacement, as he’s hardly a downfield threat like Jackson. But Matthews can offer a familiarity with Philadelphia’s offense while likely seeing time in the slot.

Jordan Matthews Worked Out For Eagles

The Eagles’ search for a new wide receiver could lead them to a familiar face. On Tuesday, the Eagles brought in Jordan Matthews for a work out, according to Aaron Wilson of the Houston Chronicle (via Twitter). 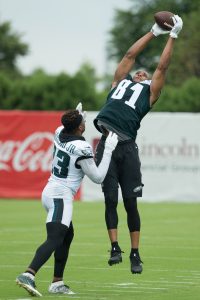 Matthews had a pair of stints with the 49ers this season, appearing in a single game (Week 7 vs. the Redskins). He’s also had workouts with the Vikings and Saints, and at only 27-years-old, there’s apparently some hope that the receiver can emerge from his current journeyman status.

Matthews had his best three seasons with Philly between 2014 and 2016, hauling in 225 receptions, 2,673 yards, and 19 touchdowns. However, since suffering a knee injury with Buffalo in 2017, he hasn’t had the same production.

The former second-rounder spent the 2018 season with Philly, hauling in 20 catches for 300 yards and two scores. With DeSean Jackson ailing, the Eagles are predictably in the market for some receiver help. Matthews’ familiarity with the offense could make him a somewhat reliable target for Carson Wentz down the stretch.

Veteran receiver Jordan Matthews is looking for a new team yet again. Matthews was released by the 49ers earlier today, the team announced. San Francisco needed the roster spot for LS Kyle Nelson, who they activated from his suspension.

Matthews signed a one-year, $1.8MM deal with a $300K signing bonus earlier this offseason, but was released at final cuts. After Jalen Hurd was placed on injured reserve a few weeks ago, the 49ers re-signed Matthews. The Vanderbilt product is approaching journeyman status, as he’s been with four team in just the past three years. Originally drafted by Philly in the second-round back in 2014, Matthews had some very productive years with the Eagles. He got traded to the Bills, and then injuries started to pile up.

After getting released by San Fran right before the start of the season he had workouts with the Vikings and Saints, so maybe he can latch on with one of those teams. Still only 27, he should be able to resurface at some point soon and he could get brought back by the 49ers.

After rejoining the Eagles last year, he had 20 catches for 300 yards and two touchdowns in 15 games. Nelson was suspended ten games for PEDs toward the end of last season, but the team clearly never lost confidence in their long-snapper. Back in March, they signed him to a four-year extension.

Jordan Matthews will head back to San Francisco. The recently released wide receiver will re-sign with the team and take Jalen Hurd‘s roster spot, per Mike Garafolo of NFL.com (on Twitter). The 49ers are placing Hurd on IR.

Hurd has been dealing with a back stress fracture, suffered in San Francisco’s first preseason game, and will now be out until at least December. He will join wideout Trent Taylor on the 49ers’ IR list. The 49ers used a third-round pick on Hurd this year, but he’s yet to debut.

Matthews signed with the 49ers early in the offseason but did not make the team. He participated in multiple workouts during the regular season’s audition circuit but did not sign anywhere.

The sixth-year wideout has not been able to re-establish his previously promising career track since being traded from Philadelphia to Buffalo in 2017 but stands to join former Bills teammate Marquise Goodwin, along with Dante Pettis and rookie Deebo Samuel, as notable 49ers receivers. A former second-round pick, Matthews is still just 27. He eclipsed 800 yards in a a season from 2014-16, doing so in both Chip Kelly and Doug Pederson‘s offenses.