The Cowboys are already sniffing around at replacements for Rashard Robinson. NFL Network’s Tom Pelissero reports (via Twitter) that cornerback Holton Hill worked out for the Cowboys today. However, Clarence Hill of the Fort-Worth Star Telegram tweets that the defensive back left Dallas without a deal.

Hill, a 2018 undrafted free agent out of Texas, spent the first three seasons of his career with the Vikings. The defensive back saw time in 16 games (three starts) as a rookie, finishing with 36 tackles, seven passes defended, and an interception while appearing in 36-percent of his team’s defensive snaps.

Unfortunately, Hill has only seen time in 12 games since that time, collecting 37 tackles, one sack, and four passes defended. His 2019 campaign was limited by a pair of suspensions, while his 2020 campaign was limited thanks to a stint on injured reserve. The 24-year-old was ultimately waived/injured by the Vikings in December.

With Robinson set to miss a pair of games thanks to suspension, the Cowboys moved on from the defensive back last week. The team is currently rostering eight cornerbacks, a relatively modest number heading into camp, so it’s not a surprise that they’re pursuing options at the position.

The Vikings will enter their Aaron Rodgers rematch decimated at cornerback. They placed Mike Hughes on IR Friday, and ESPN.com’s Courtney Cronin reports the neck injury Hughes sustained in Week 6 has the rest of his season in doubt. 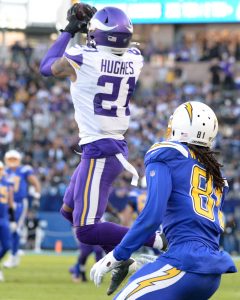 Neck trouble would be an automatic concern regardless of circumstances, but Hughes has a history with neck issues. He landed on IR before Minnesota’s playoff slate last season, and a belated report indicated the former first-round pick suffered broken vertebra in his neck. Hughes recovered in time for this season, but Friday’s report is certainly troubling for his NFL future.

Hughes has not been able to stay healthy as a pro. An ACL tear ended his 2018 rookie season after six games. He played 14 last season but has missed time this year. With 2018 first-round picks being the first to have fully guaranteed fifth-year options, it now appears a certainty the Vikings will pass on Hughes’ come May.

The Vikings did, however, make Hughes a key piece of their cornerback puzzle this offseason. They let Trae Waynes and Mackensie Alexander defect to the Bengals, doing so after cutting former No. 1 corner Xavier Rhodes. Minnesota drafted corners Jeff Gladney and Cameron Dantzler in Rounds 1 and 3, respectively, this year.

Dantzler, however, resides on the Vikings’ reserve/COVID-19 list. He will miss Sunday’s Packers tilt, leaving Gladney as the only healthy corner from the Vikes’ regular rotation. Holton Hill is also out with a foot injury.

Holton Hill is finally back. The Vikings activated the young cornerback after he finished serving his suspensions and waived linebacker Cameron Smith in a corresponding roster move, according to Ben Goessling of the Star Tribune (Twitter link).

Back in April, Hill was slapped with a four-game ban for a PED violation. A few months later he was suspended again, this time for a substance abuse violation, which earned him another four games. Hill made the team as an undrafted rookie last year and ended up playing a key role, appearing in all 16 games and starting three. A Texas product, Hill had been slated for a lot of playing time in 2019. Still only 22, Hill could provide a huge boost to a Vikings defense that quietly hasn’t been as good as in years past.

Goessling writes that Hill could make his season-debut Sunday against the Chiefs, but that doesn’t sound definite. Smith is a rookie who was released at final cuts and then signed to the practice squad before being promoted a couple weeks ago. A USC product, he was a fifth-round pick in April’s draft.

Vikings cornerback Holton Hill has been suspended, once again. This time around, it’s a four-game ban for violating the NFL’s policy and program on substances of abuse, as ESPN.com’s Adam Schefter tweets.

Hill, 22, made the Vikings as an undrafted free agent out of Texas and wound up appearing in all 16 games for the Vikings last year, including three starts. He finished out with 36 tackles in total and made his first career interception in the Vikings’ October romp over the Jets.

This year, he was slated for a significant role in the secondary, but a pair of four-game bans will keep him sidelined until the midway point of the season. In April, the Vikings learned that they would be without Hill for a quarter of the season thanks to a PED policy violation.

The team will not be releasing a statement, per Chris Tomasson of the St. Paul Pioneer Press (via Twitter).