The Panthers are bringing in another defender familiar with head coach Matt Rhule. The team announced they have signed defensive tackle Matt Ioannidis to a one-year deal. Sirius XM’s Adam Caplan adds (on Twitter) that the contract is worth $5.9MM. 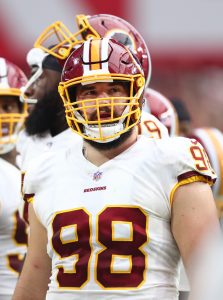 The 28-year-old was released by the Commanders earlier this week. The move created just under $7MM in cap space, but meant he would be changing teams for the first time in his career. Given his production, it doesn’t come as a surprise that he was able to find a new home so quickly.

The former fifth round pick established himself as a significant interior pass rush presence during his six seasons in the nation’s capital. His best year came in 2019, when he totalled 64 tackles and 8.5 sacks. He was limited to just three contests the following year, but came back healthy in 2021. For his career, he has posted 24.5 sacks.

Ioannidis will replace DaQuan Jones, who joined the Bills at the start of free agency. As a four-year player at Temple, he marks another signing by the Panthers who has experience playing under Rhule. Alongside Derrick Brown, he will likely form a disruptive duo at the heart of their defense.

Brandon Scherff will be placed on Washington’s Reserve/COVID-19 list (Twitter link via Ben Standig of The Athletic). With the All-Pro guard added to the tally, WFT currently has 16 players on the list headed into tomorrow’s game against the Eagles.

Washington expects offensive lineman Matt Ioannidis to be cleared in time (Twitter link via Edward Ford of FOX 61), but everyone else’s status is TBD. That includes quarterbacks Taylor Heinicke and Kyle Allen, which means that journeyman Garrett Gilbert could be in line to start.

Scherff, who turns 30 on Sunday, missed a total of 18 games from 2017-2020. So far this year, he’s suited up for just nine games and he’ll miss another this week. Playing on his second-straight franchise tag at a rate of $18.04MM, he’s scheduled for free agency in the spring.

Washington still has a 20% chance of making the playoffs, per the stats at Five Thirty Eight. But, at 6-7, a loss to the Birds would likely level those odds.

The Redskins and DE Matt Ioannidis have agreed to a three-year, $21.75MM extension, per Mike Garafolo of the NFL Network (via Twitter). The former fifth-round pick out of Temple can earn another $3MM in incentives, and Ian Rapoport of NFL.com tweets that Ioannidis will receive $14MM in guaranteed money.

Ioannidis has quietly turned himself into a quality member of Washington’s defensive line rotation, and he’s gotten better with each year. He would have been eligible for free agency for the first time in 2020, but the Redskins made sure that didn’t happen. Instead, they locked him up on a relatively modest deal that still gives Ioannidis a nice influx of cash. He will now be under club control through 2022.

Ioannidis had something of an inauspicious start to his professional career, as the Redskins waived him during final cutdowns in September 2016 but re-signed him to the practice squad immediately thereafter. He was promoted to the active roster several weeks into the season and ultimately suited up for 10 games in his rookie campaign.

He cracked the starting lineup in 2017, and although his snap count actually decreased a bit in 2018, his sack totals went up, from 4.5 in 2017 to 7.5 in 2018. There is still room for him to grow, but the Redskins are clearly confident in his ability to continue developing his game as they continue to utilize his pass-rushing skills.

In 2018, Ioannidis graded out as an above-average player at his position per Pro Football Focus’ advanced metrics.

Kedric Golston is done for the year, Redskins coach Jay Gruden told reporters (Twitter link via Mike Jones of The Washington Post). In a related move, rookie defensive tackle Matt Ioannidis will be called up from the practice squad. 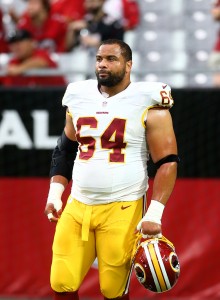 Golston signed a one-year, $1MM deal with the Redskins this offseason. Unfortunately, the nose tackle’s season is already over after he went down with a strained hamstring on the first play of Sunday’s game against Cowboys. The Redskins will now rely on Ziggy Hood as their primary nose tackle, though the Redskins other options for depth.

Over the last ten years for the Redskins, Golston has appeared in 142 games with 53 starts. Ioannidis, a Temple product, was selected in the fifth round of this year’s draft. It was a surprise to many when he didn’t make the 53-man roster, but he passed through waivers and the Redskins were able to re-sign him to the taxi squad. We’ll find out now how NFL-ready Ioannidis is.