WEDNESDAY, 5:56pm: As expected, Jenkins will earn the veteran minimum, which in the 35-year-old 13th-year veteran’s cas 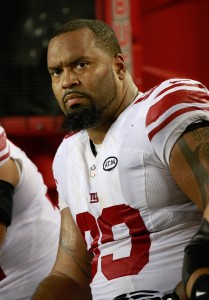 e will be $985K, Master Tefatsion of the Washington Post reports (on Twitter). Jenkins, who twice earned more than $6MM in a season earlier in his career, played for $1.4MM last season with the Giants.

MONDAY, 11:24am: Cullen Jenkins‘ tour of the NFC East continues. The Redskins have agreed to sign the veteran defensive end to a one-year deal, according to a source who spoke with Mike Jones of the Washington Post (on Twitter).

Jenkins worked out for the Redskins today and it didn’t take long for a deal to materialize. Jenkins will now join Stephen Paea, Ricky Jean-Francois, James Gayle, and Corey Crawford on the Redskins depth chart behind presumptive starters Chris Baker and Kendall Reyes. Jenkins will probably still have to prove himself to Redskins coaches in order to make the upcoming 53-man cut.