Mario Edwards resides as a key piece for the Raiders’ retooled defense but hasn’t practiced since suffering a hip injury during the team’s first preseason game. Initially believed to be in line to miss one or two regular-season games, Edwards could now be an IR list candid 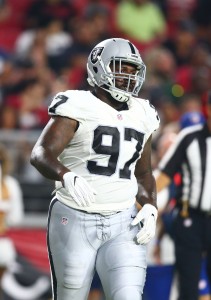 Jack Del Rio told Vic Tafur of the San Francisco Chronicle the second-year defensive end may need to start the season with this distinction, which would shelve Edwards for a minimum of six games and deal a blow to the Raiders’ front.

The previous IR-DTR format has been altered, giving teams the option of removing one player from IR after he’s spent six weeks there and is again healthy enough to play.

This would allow Oakland to use an extra roster spot for a depth player while Edwards continues his rehabilitation but would also potentially stunt the development of a talented performer. Edwards functioned as a defensive end and and defensive tackle for the Raiders last season, rating as one of Pro Football Focus’ best run-stoppers among edge defenders. He only registered two sacks as a rookie but stood to benefit from the Raiders’ acquisition of Bruce Irvin, with the 2015 second-round pick being set to rush from the interior on passing downs.

Edwards, of course, needed extensive rehab time to make it back to the field in time for minicamp. A mysterious neck injury ended his rookie season in December, and the former Florida State talent wasn’t cleared medically to return until May. The Raiders are deciding whether or not to allow Edwards extra time to heal this latest setback and return by late October.

In Edwards’ place, Oakland has been running out third-year veteran Denico Autry, a third-year UDFA. The Raiders also drafted Jihad Ward in the second round, and the former Illinois cog lined up across the Fighting Illini’s defensive fronts. So, the team has more options than it did a season ago when Edwards went down.