Theo Riddick is calling it a career. On Friday, the Raiders placed the tailback on the reserved/retired list, marking the end of his NFL run.

Riddick made a lot of noise with Detroit from 2013-18, mostly as a pass-catching specialist and check down artist for Matthew Stafford. Before his retirement, he was set to slot somewhere behind Kenyan Drake and Josh Jacobs on the Raiders’ depth chart.

Riddick’s best season came in 2015, when he had 697 yards through the air to the delight of Lions fans and fantasy football owners. However, he hasn’t made much of a statistical impact since leaving the Motor City. We here at PFR wish him the best in retirement.

Despite agreeing to terms with Kenyan Drake, the Raiders are keeping Theo Riddick. They reached an agreement to re-sign the veteran passing-down back, Field Yates of ESPN.com tweets.

It is a one-year deal that does not provide much assurance Riddick will make the Raiders’ 53-man roster, with Yates adding only $50K of the pact is guaranteed. But the Raiders do have Riddick in their plans, for the time being.

Riddick, 30 in May, played a small role in six Raider games last season. The former Lions outlet option totaled 57 yards on 11 touches last season. This came after Riddick spent a year on the Broncos’ IR after suffering an injury during the preseason.

Riddick made a lot of noise with Detroit from 2013-18, mostly as a pass-catching specialist and checkdown artist for Matthew Stafford. He’ll slot in (for now) behind Drake and Josh Jacobs on the depth chart. His best season was in 2015, when he had 697 yards through the air, although he hasn’t made much of an impact since leaving the Motor City.

After Trent Brown‘s second lengthy absence this season, the Raiders may finally have their right tackle back in action soon.

The Raiders activated Brown, Lamarcus Joyner and Theo Riddick off their reserve/COVID-19 list Wednesday. Brown contracted the coronavirus earlier this season and experienced significant complications from the disease, requiring hospitalization and a second stay on Las Vegas’ reserve/COVID list.

Brown was on track to practice this week, and while the 2019 Pro Bowler might not be ready to return against the Jets, staying on schedule represents a positive development given his issues this season. If Brown is not ready to suit up this weekend, two weeks’ worth of practices could well be enough for a Week 14 re-emergence to take place.

Brown has played all of 73 offensive snaps this season, with an injury a few plays into the season moving him to IR, and has required two stints on the virus list. The Raiders have experienced issues at both tackle spots recently, though Kolton Miller returned from a brief absence late last month. He and Brown have barely seen the field together this season, however, and the latter’s return would be a boon to the suddenly struggling team’s playoff hopes. Las Vegas is already out starting guard Richie Incognito for the season.

Joyner has also landed on the Raiders’ COVID list twice this season. He was part of a slew of Raiders to be placed on the list after Clelin Ferrell‘s positive test late last month, but after Joyner initially came off the list with teammates, the Raiders moved him back on the list just before their Chiefs rematch. Joyner has missed the past two games.

On this date in 2016, the Lions finalized a three-year, $12.75MM deal with running back Theo Riddick. At the time, the deal positioned Riddick as one of the higher-paid tailbacks in the NFL. Today, the deal serves as a reminder of how quickly things can change in football. 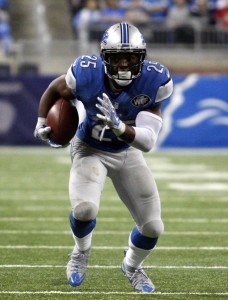 Riddick, who had just turned 25, was coming off of a breakout year. He hauled in 80 passes – the most of any running back in 2015 – for 697 yards and three touchdowns. The Lions didn’t want to let the dual-threat RB get anywhere near free agency, so they locked him up through 2019. With Riddick and the speedy Ameer Abdullah in the fold, the Lions figured that they were well-set in the backfield.

Riddick kicked off his new deal with 728 all-purpose yards in ten games and set a new career-high with 3.9 yards per tote. And, naturally, he showed his soft hands with 53 grabs. Then, a wrist injury halted his season in November. Riddick returned in 2017, and stayed healthy, but the Lions’ ground game was lacking. In 2018, rookie Kerryon Johnson emerged as a total game-changer, and that changed the course of Riddick’s career. After Riddick logged just 40 carries, the Lions no longer felt that he was worth his contract. In July of 2019, they dropped the 27-year-old to save less than $4MM against the salary cap.

Today, Riddick finds himself on the fringe. After missing the Raiders’ final cut, he’s waiting for his next opportunity on Jon Gruden‘s practice squad.

Theo Riddick could be on the move again. The veteran running back is being cut by the Raiders, a source told Paul Gutierrez of ESPN (Twitter link).

That being said that doesn’t mean he won’t be in Vegas, as Gutierrez notes the Raiders want him as a veteran exception on the practice squad. He also writes that Riddick impressed during his brief time in camp. The pass-catching specialist just signed with the team on August 23rd.

Riddick broke into the league as a sixth-round pick of the Lions in 2013, and spent the next six years in Detroit. He carved out a nice role on passing downs, and for a while was one of the top receiving backs in the league. His best season as a receiver came in 2015 when he caught 80 passed for 697 yards and three touchdowns.

His production declined shortly thereafter, and the Lions finally released him in July of last year. He quickly latched on with the Broncos, but didn’t appear in a game for Denver after suffering a season-ending shoulder injury.