Caraun Reid will receive an opportunity in yet another city. The Panthers are signing the veteran defensive tackle, bringing him aboard Monday. To make room on its roster, Carolina waived linebacker Chris Orr. 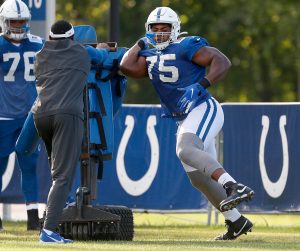 A veteran of seven NFL teams since coming into the league in 2014, the veteran defensive lineman will have a chance to accomplish a rare NFL feat. Should he make the Panthers’ 53-man roster, Reid will have played for six teams in the past six years.

Reid, 29, spent the 2020 season bouncing on and off the Jaguars’ active roster. He played in seven games with Jacksonville last season — all as a backup. He started three games for the 2019 Cardinals and played for the Cowboys, Lions and Chargers in the three years prior. Reid also spent time with the Colts and Washington but never saw regular-season action with those teams. Overall, the Princeton alum has played in 54 games and started 16 since entering the league as a fifth-round pick.

Reid joins ex-Titans starter DaQuan Jones as veteran interior D-linemen to sign with the Panthers this year. Carolina also used multiple draft picks to address this position, selecting Daviyon Nixon in Round 5 and Phil Hoskins in Round 7.

The Panthers have been busy adding undrafted free agents, as the organization announced that they’ve agreed to terms with 17 rookies:

As the press release notes, three of those free agents (Mack, Sutton, Thompson) officially signed with the Panthers on Monday.

The front office was clearly looking to plug a hole at linebacker, as the organization added five undrafted rookies at the position. While the front office used each of their seven draft picks on defensive players, all those rookies are either defensive backs or defensive linemen.

The Panthers are also making a relatively large investment in Bayless. Aaron Wilson of the Houston Chronicle tweets that the wideout will earn $100K in guaranteed money. The Arkansas State product finished last season with 93 receptions for 1,653 yards and 17 touchdowns.