With the Texans set to begin camp tomorrow, the team is already making some roster changes. The team released wideout Donte Moncrief with a non-football injury designation, according to NFL.com’s Tom Pelissero (via Twitter).

Moncrief spent the first four seasons of his career with the Colts, including a 2015 campaign where he hauled in a career-high 733 yards. Since leaving for the Jaguars in 2018, the veteran has spent time with five different organizations (including Houston).

Moncrief was signed by the Texans back in March, and it was believed he’d add another veteran presence to the receivers room. However, even with the impending trade of Randall Cobb, Moncrief may have found himself squeezed off the roster by recent acquisition Anthony Miller. The team is also rostering the likes of Brandin Cooks, Keke Coutee, Isaiah Coulter, Andre Roberts, and rookie Nico Collins.

Donte Moncrief is joining the Texans. NFL.com’s Tom Pelissero reports (via Twitter) that the free agent wideout is signing a one-year deal with Houston. 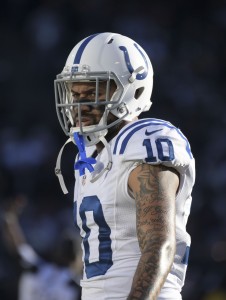 Moncrief spent the first four seasons of his career with the Colts, including a 2015 campaign where he hauled in a career-high 733 yards. Since leaving for the Jaguars in 2018, the veteran has spent time with five different organizations.

While there’s uncertainty surrounding who will be under center for the Texans, the team could have a similar grouping of receivers in 2021. Other than Will Fuller, the Texans are likely to return Brandin Cooks, Randall Cobb and Keke Coutee.

Moncrief isn’t the only wideout who’s joining the Texans on a one-year deal. Mark Berman of Fox 26 in Houston reports (via Twitter) that the team is also signing Alex Erickson. The 28-year-old had spent his entire career with the Bengals, including a 2020 campaign where he had 12 receptions for 139 yards. Erickson also has extensive experience as a return man, having returned 135 punts and 108 kickoffs.

The Patriots have signed wide receiver Donte Moncrief to the practice squad, per a club announcement. This was the expected move after the former third-rounder auditioned for the Pats earlier this week. 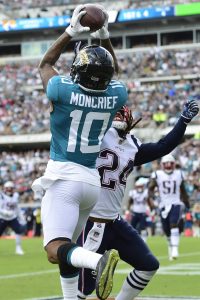 Moncrief was recently released off the Jets’ practice squad, despite their own glaring need for offensive help. That wasn’t promising for Moncrief’s prospects, but the talent is still mostly there.

Moncrief first made his name with the Colts, playing as a featured regular in Andrew Luck‘s offense. The veteran totaled 13 touchdown receptions between the 2015-16 seasons for Indy and set a career-high in ’15 with 733 receiving yards. Since then, things have been a bit rocky — he appeared a grand total of eight games for the Panthers and Steelers in 2019, yielding four catches for 18 yards.

Now, the 27-year-old will await his next opportunity while showing his stuff on the practice field. Thanks to Tuesday’s trade for Dolphins receiver Isaiah Ford, he won’t be the only newcomer to the group.