The Falcons are set to begin training camp this week, but Thomas Dimitroff said he’ll be focused on working out a contract with running back Devonta Freeman. The general manager told ESPN.com’s Vaughn McClure that he’d like to have a deal finalized by Thursday at the latest (Twitter link).

We’ve heard reports throughout the offseason that the two sides would ultimately agree on a new deal, with owner Arthur Blank recently stating that an extension was coming “fairly soon.” Meanwhile, while Freeman is obviously seeking a new contract, he’s more than willing to wait for a deal that is reflective of his talent. Over the past two years, the running back has collected at least 1,000 yards and 11 touchdowns per season, and he’s averaged 63 receptions during that same span.

Last week, Mike Florio of ProFootballTalk.com wondered if the extension delay could be attributed to uneasy negotiations. Earlier today, former agent Joel Corry tweeted that Freeman’s camp should “insist” that the recently-rejected contract offer to Le’Veon Bell “reflects the top” of the running back market.

The Vikings promoted running back C.J. Ham off of the practice squad in advance of Saturday’s game against the Packers. To make room, the Vikings placed cornerback Mackensie Alexander on injured reserve. 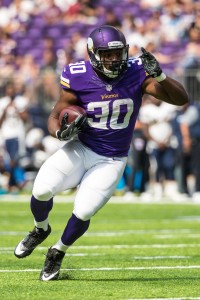 This may not be a great sign for Adrian Peterson, who hasn’t practiced in recent days. Peterson returned from meniscus surgery to help the Vikings make a playoff push. Now that the Vikings are 7-7 with a 3% chance of qualifying for the postseason, the veteran doesn’t have much incentive to press his luck and take the field. We should know more about Peterson’s availability later on today.

A product of Division II Augustana College in South Dakota, Ham helped his team reach the postseason in his final year and led the Northern Sun Conference in rushing yards and touchdowns. In May of 2016, he signed with the Vikings as a free agent after competing in the rookie camp on a tryout basis. He did not make the team’s final 53-man cut in September, but he was brought on to the practice squad. After months of waiting, he may finally be making his NFL debut.