The Eagles have waived wide receiver Dorial Green-Beckham, the club announced today. In a related move, Philadelphia has signed quarterback Dane Evans to a three-year contract. 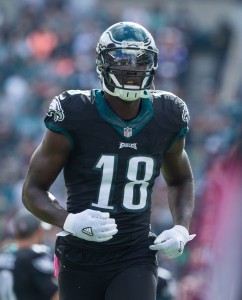 Green-Beckham’s stint with the Eagles is now over after less than a calendar year, as Philadelphia acquired DGB from the Titans in mid-August of 2016, sending offensive lineman Dennis Kelly to Tennessee in the process. Betting on Green-Beckham’s draft pedigree and natural athleticism, the Eagles decided to give the former second-round choice a chance despite persistent questions about his work ethic.

While playing as the Eagles’ third wideout behind Jordan Matthews and Nelson Agholor, Green-Beckham saw action on roughly 57% of Philadelphia’s offensive plays, but didn’t do much with those snaps. On 74 targets, DGB managed only 36 receptions for 392 yards and two touchdowns. The Eagles have since acquired multiple receivers, including free agents Alshon Jeffery and Torrey Smith and draft picks Mack Hollins and Shelton Gibson, lessening the need for Green-Beckham.

As Jeff McLane of the Philadelphia Inquirer notes (Twitter link), the Eagles are aiding Green-Beckham by waiving him now as opposed to later this summer, as he’ll have a chance to latch on with another club before training camps begin. Entering only his age-24 campaign, DGB still offers youth and upside despite his struggles through two NFL seasons, and — if he’s not claimed off waviers — he’ll enter a free agent receiver market dominated by veterans such as Anquan Boldin, Vincent Jackson, and Stevie Johnson.

Evans, meanwhile, went undrafted out of Tulsa earlier this year after completing 59.5% of his passes for 3,348 yards, 32 touchdowns, and 12 interceptions during his senior season. In a predraft scouting report, Pro Football Focus said Evans has an excellent arm but inconsistent touch and a sub-par ability to read opposing defenses.