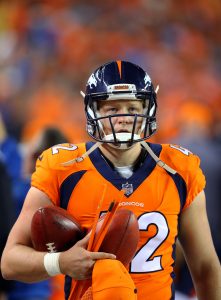 It appears the Broncos have found their long snapper to pair with newly-signed punter Marquette King, signing Casey Kreiter to an exclusive-rights tender, per Charean Williams of Pro Football Talk. The team has yet to announce the deal.

The Broncos signed Kreiter prior to the 2016 season and he played in 10 games before being placed on injured reserve. He appeared in all 16 games last season for Denver.

The Cowboys originally signed Kreiter as an undrafted free agent out of Iowa in 2014. He competed in the Cowboys’ training camp in 2014 and ’15 but was unable to win the starting job either season.

Kreiter, 27, will provide a familiar face within the Broncos’ special teams unit that’s seen a shakeup this offseason. Kicker Brandon McManus is expected to return but the team added King at punter while letting Bennie Fowler and Cody Latimer depart in free agency.

The Broncos currently don’t have another long snapper on their roster outside of Kreiter.