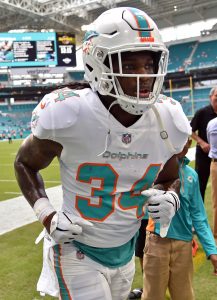 After spending the first three seasons of his career with the Bears, Perry had spent the past two campaigns with the Dolphins. The 27-year-old had 21 tackles during his two years in Miami, including a team-leading 12 special teams tackles in 2018. He also added a forced fumble to his resume last season.

The running back hasn’t done much offensively throughout his career. The Dolphins gave him eight carries in 2017, and Perry finished the campaign with 30 yards and a pair of first downs. The veteran also has two career receptions and 22 career kick returns.

In Buffalo, we can probably expect more of the same from Perry. New special teams coordinator Danny Crossman will likely find ways to capitalize on his talents, but it’s unlikely he’ll unseat any of LeSean McCoy, Frank Gore, or Marcus Murphy for snaps on offense.