Andre Branch‘s Cardinals stay did not last too long. The team will release the veteran defensive end less than a month after signing him, Adam Schefter of ESPN.com tweets.

The Cardinals signed the former Jaguars and Dolphins edge player shortly after training camp began. After the Dolphins cut Branch earlier this offseason, the Cards were the only team to bring him in for a visit or workout. He combined for 10 sacks between the 2016-17 seasons but registered just 1.5 in 14 games last season.

This stands to be Branch’s age-30 season. The Cards added Terrell Suggs and Brooks Reed as Chandler Jones sidekick options. They also claimed Jeff Holland, who came to Denver as a UDFA during Vance Joseph‘s stay, with their No. 1 overall waiver priority.

The Cardinals are bringing in another veteran edge defender. Former Jaguars and Dolphins defensive end Andre Branch agreed to terms with the Cardinals on a one-year deal, Darren Urban of AZCardinals.com notes.

Branch spent the past three seasons in Miami but was one of the many veterans the Dolphins jettisoned this offseason. The Cardinals recently released Matt Longacre, and Branch looks like the team’s latest veteran depth option in its Chandler Jones– and Terrell Suggs-fronted group. Branch, 30, met with the Cardinals in June.

While Branch has only played in 4-3 schemes, the Cardinals are likely adding him to rush the passer. So, his role in their 3-4 scheme likely does not stand to be too different. Branch also played under new Cardinals DC Vance Joseph in 2016. No other team was connected to the seven-year veteran this offseason.

The former second-round Jaguars pick has 25.5 career sacks (1.5 in 14 games last season). He registered 10 between the 2016 and ’17 seasons, with the Dolphins previously signing him to a three-year, $24MM deal. Branch joins Suggs and Brooks Reed as Jones complementary cogs Arizona added this year.

Former Dolphins defensive end Andre Branch will visit the Cardinals on Thursday, a source tells NFL.com’s Ian Rapoport (on Twitter). The Cardinals have been working hard to find help in the late stages of free agency and Branch could provide veteran support for the team’s pass rush unit.

We haven’t heard much about Branch since he was released by the Dolphins in March, but he offers an impressive resume and could be a nice value addition in the later stages of free agency. Over the last three seasons with the ‘Fins, Branch recorded 55 tackles, 11.5 sacks, and three forced fumbles. Branch didn’t make sense for Miami with nearly $7MM owed to him for 2019, but he would be a solid pickup on a lesser deal for Arizona.

Armed with the top waiver priority in the NFL, the Cardinals pounced on former Browns tackle Desmond Harrison earlier this month. You can expect them to continue to use their No. 1 slot to land other worthwhile castaways while exploring low-cost vets like Branch between now and September.

Earlier this offseason, the Cardinals signed Terrell Suggs to bolster the pass rush opposite Chandler Jones. That should help the cause, but they’ll need additional firepower after shifting Haason Reddick to an off-ball role.

The Dolphins are cutting guard Ted Larsen, a league source tells Cameron Wolfe of ESPN.com (on Twitter). The Dolphins also made their release of defensive end Andre Branch official. Between the two cuts, the Dolphins will save $9.15MM in cap space for 2019.

Larsen, 32 in June, joined the ‘Fins on a three-year free agent deal in March of 2017. Unfortunately, he was plagued by injuries in his first year and underperformed in 2018. Last year, Larsen graded out as the second-worst qualified guard in the NFL, according to Pro Football Focus. For the Dolphins, this move was something of a no-brainer – dropping the veteran meant $2.125MM in savings versus $417K in dead money.

The Dolphins have made one of their first cost-cutting moves. NFL.com’s Ian Rapoport reports (via Twitter) that the team is releasing veteran pass-rusher Andre Branch.

Following an underwhelming tenure with the Jaguars, the former second-rounder joined the Dolphins back in 2016. He proceeded to sign a three-year, $24MM deal with the organization in 2017, but he hasn’t necessarily been worth the investment. After starting all 14 of his games in 2017, the 29-year-old only started one of his 14 games in 2018.

He finished the campaign with 25 tackles and 1.5 sacks. Pro Football Focus wasn’t fond of his performance in 2018, ranking him 101st among 103 eligible edge defenders. With Branch set to earn close to $7MM in 2019, the Dolphins decided to move on from the veteran.

Cameron Wake and William Hayes are set to hit free agency this summer, leaving the team with Robert Quinn, Charles Harris, and Johnathan Woodard (ERFA) as their lone defensive ends. There were rumors that the Dolphins could be frontrunners for Patriots’ lineman Trey Flowers, and the organization can hope that some of the other top free agent pass rushers (a grouping that includes DeMarcus Lawrence, Jadeveon Clowney, Frank Clark and Dee Ford) somehow don’t get franchised. 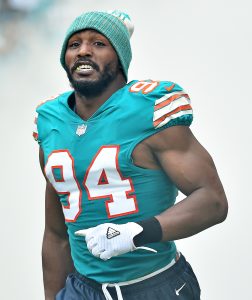 Naturally, the upheaval won’t stop there, but the Dolphins have some big decisions to make on significant contracts in the coming weeks and months. Ryan Tannehill is likely done in South Beach and players like defensive tackle Akeem Spence ($2.5MM cap savings) and guard Ted Larsen ($1.9MM) could also be dropped from the roster, Jackson hears.

And, if the Dolphins really want to turn over a new leaf, they may decide against retaining unrestricted free agents like Frank Gore and Cameron Wake and move on from receiver Danny Amendola, whose entire $6MM cap hit can be washed out. Jackson adds that the future of veterans like guard Josh Sitton and safety T.J. McDonald is also in question.

Quinn, 29 in May, came to Miami via a spring trade with the Rams. The former first-round pick notched 6.5 sacks and 38 tackles, but graded out as just the No. 42 ranked edge defender in the NFL per Pro Football Focus. Branch, meanwhile, was one of the lowest-ranked DEs out of 108 qualified players.

Parker was once viewed as the team’s future at wide receiver, but injuries have hampered his progress over the last four years. This year, he managed just 24 catches for 309 yards and a touchdown in eleven games.

Dolphins defensive end Andre Branch suffered a knee injury on Sunday that will cause him to miss 2-4 weeks of action, a source tells Armando Salguero of the Miami Herald (on Twitter). It’s a bad blow for a Dolphins D that will also be without fellow defensive end William Hayes for the remainder of the season.

The Dolphins entered the year with solid edge rushing depth, but they’ll now have to rely heavily on Charles Harris to rotate in for starting defensive ends Cameron Wake and Robert Quinn. They’ll have to add a player or two for depth, at the very least, and there aren’t a ton of impact DEs left on the open market. Robert Ayers, who had a one-day stint with the Lions in late August, is one of the most notable names left in free agency. Odds are, the Dolphins will have to settle for some less inspiring options while they wait for Branch to heal up.

Branch, 29, tallied five tackles in the first three weeks of the season. In his two previous Dolphins seasons, Branch amassed ten sacks and played mostly as a starter.