The Raiders have signed Shareece Wright to a one-year deal. The cornerback personally announced the news on his Instagram account and the deal has been confirmed by Michael Gehlken of the Review Journal (on Twitter). 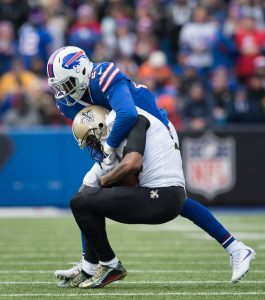 Wright will serve as cornerback depth in Oakland. There, he’ll reunite with safety Marcus Gilchrist, who signed with the Raiders this week. Both players were in the same Chargers draft class in 2011 and spent four years together.

Wright appeared in 12 games for the Bills last season and started in five of those contests. He finished out with 42 tackles, one interception, and five passes defensed.

The Bills announced the signing of free agent cornerback Shareece Wright. Wright visited with Buffalo in early April, but the team waited until after the draft to add him to the roster.

Wright, 30, has been on the open market since the Ravens cut him loose on March 7. Even though he has 42 career starts to his name, the Bills were the only team known to have real interest in him this offseason. Wright has not recorded an interception since 2013 and last year he ranked 75th out of 111 qualified cornerbacks, according to Pro Football Focus.

The Bills made a big-time upgrade at cornerback on Thursday when they seleted LSU’s Tre’Davious White with the No. 27 overall pick. White and Ronald Darby will hold down the starting spots, but Wright could find his way to the roster as a reserve.

Wright is now the fourth third offseason addition to their cornerback corps, joining White and free agent pickups Marcus Cromartie and Leonard Johnson. It remains to be seen how this group will perform as a whole following the losses of Stephon Gilmore and Nickell Robey-Coleman.

Free agent cornerback Shareece Wright visited the Bills on Wednesday, according to an announcement from the team.

The 30-year-old Wright has been on the open market since the Ravens released him March 7, and he hadn’t garnered any known interest until his meeting with Buffalo. Wright, also an ex-Charger, started between six and 14 games in each of the previous four seasons – including nine in 2016 – so he’d lend some experience to a Bills team that’s largely bereft at corner after No. 1 man Ronald Darby. The six-year veteran has gone three straight seasons without an interception, though, and ranked a below-average 75th in overall performance among Pro Football Focus’ 111 qualified corners in 2016.

If the Bills sign Wright, he’ll go down as the third offseason addition to their cornerback corps, joining free agent pickups Marcus Cromartie and Leonard Johnson. Those two are clear downgrades from the corners the Bills have lost this offseason, however, with Stephon Gilmore having signed with the Patriots and Nickell Robey-Coleman having somewhat surprisingly gotten his release.

The Ravens have released cornerback Shareece Wright and safety Kendrick Lewis, per a team announcement. The moves will save a combined $4.9MM in cap space.

Wright signed with the 49ers prior to the 2015 season but wound up being a healthy scratch for the first four games of the year. He was then scooped up by the Ravens and wound up being the team’s best corner in those eleven regular season games. After that, he was rewarded with a three-year deal worth up to $16MM including $5MM guaranteed. This past season, however, his performance slipped and he missed one-quarter of the games.

Prior to this season, Lewis had been plenty productive. After spending the first four seasons of his career in Kansas City, the 2010 fifth-round pick had a standout campaign in 2014 with the Texans. The defender finished the year with 84 tackles, six passes defended, three forced fumbles, and two interceptions. His 2015 with Baltimore wasn’t too shabby either. Last year, unfortunately, was pretty much a lost season for Lewis as he appeared in just six games.