Eddie Pleasant worked out for four teams in the past month. The Cardinals weren’t one of the franchises that brought the veteran safety in for an audition, but they’re signing him nonetheless. 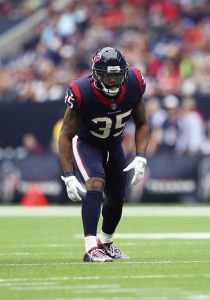 The Cards and Pleasant agreed on terms Saturday, Field Yates of ESPN.com reports (on Twitter). Pleasant spent camp with the Patriots but was released in late August.

Prior to spending barely a month in New England, Pleasant played six seasons in Houston. The Texans used the 29-year-old veteran as a backup safety during those six years. Pleasant played in 78 games for the Texans from 2013-17. Despite not starting any games, Pleasant made a career-high 49 tackles last season, the second of a two-year deal he agreed to in 2016 to stay in Houston.

Pleasant worked out for the Packers this week, and since the start of the season traveled to Atlanta, San Francisco and Seattle for workouts that did not lead to signings. The Cardinals were without Tre Boston in a loss to the Broncos on Thursday but now have six safeties on their active roster, although Budda Baker functions as Arizona’s slot cornerback.

The Patriots are letting go of another veteran, but this time it’s on the defensive side of the ball. ESPN’s Field Yates reports (via Twitter) that the team will be releasing veteran safety Eddie Pleasant.

The 29-year-old joined the Patriots earlier this offseason after having spent his entire six-year career with the Texans. The former undrafted free agent out of Oregon developed into a reliable special teamer and backup safety during his tenure in Houston, compiling 79 tackles, 2.5 sacks, three interceptions, and 17 passes defended in 78 career games. He ultimately appeared in 76 of 80 possible regular season games since his sophomore season.

In New England, Pleasant was expected to be reliable veteran on special teams, and he was even serving as a second-team safety during the early parts of camp. However, the veteran was signed late in the offseason, leaving him little time to learn the playbook. The defensive back ended up playing sparingly during the team’s first three postseason games, compiling only four tackles (all of which came during the team’s opener).

With Devin McCourty, Patrick Chung, Duron Harmon, and key special-teamer Nate Ebner presumably locked into the roster, the Patriots will now turn to the other safeties for one of their final roster spots. That grouping includes Jordan Richards, Brandon King, and Damarius Travis.