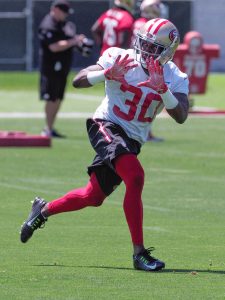 The 49ers announced today that they’ve placed defensive back Jimmie Ward on injured reserve and promoted rookie cornerback Prince Charles Iworah from the practice squad to the active roster. Additionally, San Francisco will promote wide receiver DeAndre Smelter to the 53-man roster, according to Matt Barrows of the Sacramento Bee.

Although he played safety in college, Ward, a first-round pick in 2014, was the 49ers’ nickel corner, and had started a career-high 10 games in 2016. The 25-year-old had posted two interceptions, 12 passes defensed, one sack, one forced fumble, and one fumble recovery while grading as the league’s No. 53 cornerback, according to Pro Football Focus. Ward is signed through the 2017 campaign, and San Francisco can add an extra year to his deal by exercising his 2018 fifth-year option.

Iworah, meanwhile, was selected in the sixth round out of Western Kentucky earlier this year. After being waived at final cutdowns, Iworah was quickly signed to the Niners’ taxi squad, and has spent the entire season on the PS. San Francisco will take a look at him over the final two games of the year, as he’ll play behind Tramaine Brock, Rashard Robinson, Dontae Johnson, Keith Reaser, and JaCorey Shepherd in the secondary.

Smelter, 25, was expected to contribute to the 49ers’ offense after being drafted in the fourth round in 2015, but he’s yet to appear in an NFL game thus far in his career. Smelter spent his entire rookie campaign on NFI, and after being waived earlier this year, re-signed to San Francisco’s practice squad in October.