It sounds like Carlos Henderson may have found a new home. As Troy Renck of Denver7 tweeted, a recent Instagram post from the wideout seems to indicate that he’s signed with the Redskins. A move wouldn’t be made official until Monday. 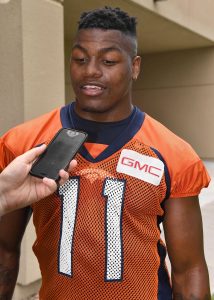 The Broncos had high hopes for the Louisiana Tech product when they selected him the third round of the 2017 draft. After tearing a ligament in his left thumb, Henderson spent his entire rookie campaign on the injured reserve. Due to a personal matter, the receiver was placed on the “did not report list” at the beginning of 2018 training camp, and he was subsequently slapped with a one-game suspension for violating the league’s substance abuse policy.

Henderson was waived by the Broncos at the end of the preseason, although he later caught on with their practice squad. However, the 24-year-old was let go for good in the middle of September. Since that time, Henderson has only had a single audition with the Bears.

The Redskins have suffered plenty of injuries at wide receiver, with Trey Quinn, Paul Richardson, Cam Sims, and Robert Davis sitting on the IR, so Henderson will provide the team with a healthy body at practice. However, considering Henderson’s one-game suspension, it’s more likely that the Redskins are eyeing the wideout as a potential option for the 2019 season.

Beginning their second year in Los Angeles, the Chargers are in an interesting spot. They have perhaps as talented a roster as they’ve possessed since their late-2000s run of AFC West titles but play in a soccer stadium and carry likely the NFL’s smallest fan base. The NFL gave Dean Spanos the option of leaving San Diego for L.A. in 2016, and he exercised it once the Bolts’ bid to secure public funding for a downtown stadium failed. But some owners were disappointed Spanos took the league up on the San Diego exit strategy, author Mark Leibovich writes in his new book, “Big Game: The NFL In Dangerous Times” (via Tom Krasovic of the San Diego Union-Tribune). Some of the owners were displeased with the efforts he put forth to land a new stadium deal in San Diego, Leibovich writes, adding this contingent of power brokers were “miffed” the Chargers owner turned the situation into “a towering embarrassment.”

This is an interesting stance considering the NFL gave the Chargers L.A. dibs before the Raiders, but now that the Bolts moved, they don’t appear to be thriving in their new market. That could have been expected given their lack of history in Los Angeles compared to the Rams or Raiders. Krasovic adds some around the league wonder if Spanos will sell the Chargers a few years into their stay at Stan Kroenke‘s Inglewood stadium in believing the franchise’s value will have peaked by then.