Jaguars To Work Out Kelcie McCray

Traded prior to two of the past three NFL seasons, Kelcie McCray is now a free agent. The veteran safety is set to make his first visit of this offseason, a trip to Jacksonville to meet with Jaguars brass, Aaron Wilson of the Houston Chronicle reports (on Twitter). 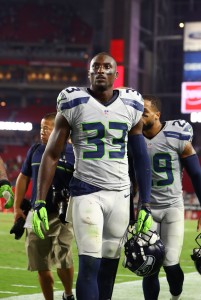 McCray will work out for the Jags on Monday, Wilson notes. The would-be sixth-year player is a UFA after being traded from the Buccaneers to the Chiefs in 2014 and from the Chiefs to the Seahawks before the ’15 season. With Seattle, McCray made seven starts as an auxiliary member of the Legion of Boom over the past two seasons. He made a career-high 35 tackles in 2016.

Free agent business is reigniting after the May 9 compensatory pick deadline passed, meaning teams can now sign players without such additions affecting the 2018 compensatory formula.

The 28-year-old McCray spent time with the Dolphins and Bucs before playing in 16 games for the 2014 Chiefs as a backup and suiting up for each game the past two Seahawks outfits played. The Jags signed Barry Church this offseason to team with Tashaun Gipson, so they’re likely on the lookout for depth. Several other young safeties populate the Jacksonville roster, but none has the kind of experience McCray does.

The Seahawks have confirmed one of their two recently-reported acquisitions, announcing that they’ve traded for safety Kelcie McCray, sending a fifth-round draft pick to the Chiefs in the swap, as we heard earlier. According to Mike Garafolo of FOX Sports (via Twitter), the deal for McCray is a public sign of what the team has privately told Kam Chancellor: Seattle isn’t willing to negotiate with him.

We’re still awaiting official word on Seattle’s reported agreement with running back Fred Jackson, so an additional cut will be required when that move is finalized. For now though, the Seahawks are down to 53 players. Via a team release, here’s how they got there: