Andrew Luck will not practice this week, Chuck Pagano said. This marks three straight weeks the previously progressing passer has been shelved because of the setback he encountered. 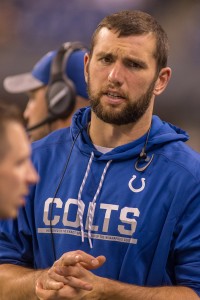 And the Colts are operating accordingly, Aaron Wilson of the Houston Chronicle tweets, noting the team is working out Connor Shaw, Matt McGloin, Matt Barkley and Josh Johnson on Tuesday.

Luck will see multiple specialists for further evaluation on his troublesome throwing shoulder, and it’s possible he could redshirt this season. The Colts have Scott Tolzien as a Jacoby Brissett backup but could be looking for a third quarterback in case they end up placing Luck on IR.

McGloin and Barkley have been summoned for workouts together previously this season, and Johnson was previously affiliated with the Colts. This is the veteran’s first known workout since the Giants parted ways with him.

The Bears announced earlier today that they had waived quarterback Connor Shaw in order to create a roster spot for wide receiver Victor Cruz. However, NFL.com’s Ian Rapoport tweets that fellow quarterback Mark Sanchez suffered a knee injury today, and the team subsequently rescinded the waiver. 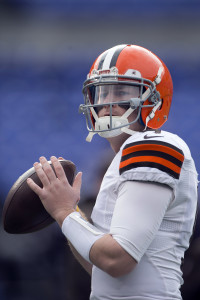 Chicago, of course, has revamped its quarterback room this offseason: not only did the Bears sign two free agent signal-callers in Mike Glennon and Sanchez, but they moved up in the draft to select North Carolina’s Mitch Trubisky at No. 2 overall. With Glennon and Trubisky set to take most of the practice reps over the next few months, the Bears likely didn’t see the need to carry a fourth quarterback on the roster.

The Bears originally acquired the 25-year-old Shaw off waivers from the Browns last summer. Shaw, who has one career start under his belt, subsequently broke his leg during the preseason and spent the entire 2016 campaign on injured reserve.

Shaw will now see third-string reps during OTAs as Sanchez recovers from his injury. Sanchez has only appeared in 15 games over the past three seasons, including a pair of appearances with the Cowboys in 2016. Over that span, the 30-year-old veteran has completed almost 64-percent of his passes for 3,127 yards, 18 touchdowns, and 17 interceptions. Adam Jahns of the Chicago Sun Times reports (via Twitter) that Sanchez is expected to be ready for training camp.

Connor Shaw left Soldier Field in an ambulance today after breaking his right leg, Ian Rapoport of NFL.com reports. Shaw suffered the injury during the fourth quarter of the Bears-Chiefs game. 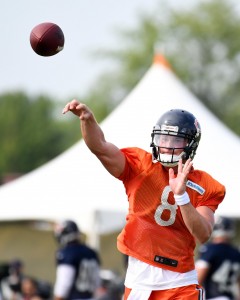 Vying for the Bears’ third-string quarterback job behind Jay Cutler and Brian Hoyer, Shaw could now be an IR candidate. Although, Rapoport notes Shaw suffered the break above the ankle and did not sustain any ligament damage, so he could return this season if Chicago saw him as valuable enough to keep on the active roster.

But Shaw missed all of the 2015 season with a thumb injury and spent the year on the Browns’ IR. This latest development certainly points to another lost season for the former South Carolina passer whom the Bears claimed on waivers from the Browns last month.

Chicago has 2014 sixth-round pick David Fales on its roster, so keeping him as the third-stringer would be logical despite the third-year passer not having any game experience. The team also houses 27-year-old backup Matt Blanchard, who has also never played in a regular-season game.

The 24-year-old Shaw came to Cleveland as a UDFA in 2014 and started a game that season for the Browns. Despite cutting Johnny Manziel as well this offseason, the Hue Jackson-led team parted ways with Shaw as well, leading him to Chicago. The Seahawks also tried to claim Shaw this summer but sat behind the Bears in the waiver-priority hierarchy. 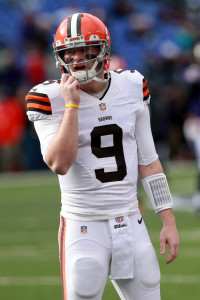