The Jaguars added a familiar face to their team yesterday. The organization announced that they’ve signed defensive back Charlie Miller to their 90-man roster. 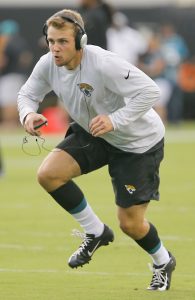 After being signed as an undrafted free agent, the six-foot-one, 190-pound Miller spent the majority of last season on Jacksonville’s practice squad. The team inked fifth-year cornerback Kenneth Acker and undrafted rookie cornerback Bryce Canady to contracts earlier this offseason, and they ended up waiving Miller soon after.

Now, the 24-year-old has another chance at making the Jaguars’ 53-man roster. He showed plenty of promise during his collegiate career, compiling 70 tackles and three interceptions in 24 games at Dartmouth College. He also earned a second-team All-Ivy League spot following his senior campaign.

Of course, similar to last year, Miller will be hard pressed to make the Jaguars’ opening day roster, although he could slide back into a practice squad role. With eight cornerbacks currently on the roster, Miller would probably having a better shot at making the team as a safety, especially after Don Carey landed on the injured reserve. Miller could end up competing with Ronnie Harrison, Cody Davis, and Jarrod Wilson for reps behind projected starters Tashaun Gipson and Barry Church.