Michael Mauti will be back with the Saints next season. According to Josh Katzenstein of NOLA.com, the linebacker and special teams ace has signed a one-year contract with the team. The 27-year-old will earn a $775K base salary, with $125K guaranteed and a $80K signing bonus. 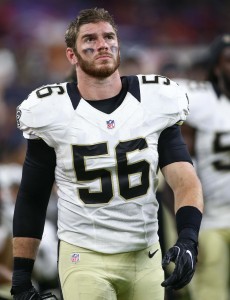 Throughout the offseason, it sounded like that Mauti would ultimately return to New Orleans. Back in April, head coach Sean Payton said that he expected the linebacker to be fully recovered from offseason surgery by the time training camp came around, even though Mauti was still a free agent at the time. Despite the optimism, Mauti worked out for the Texans late last week (via Katzenstein), but a workout with the Saints earlier today ultimately led to a new contract.

Mauti was forced to undergo three surgeries (including one to remove his large intestine) over the past year to fix his ulcerative colitis, a disease that forced him to end his 2016 season prematurely. The former seventh-round pick had to get back into football shape before securing an offer, perhaps explaining why it took so long for the organization to re-sign him.

Following two underwhelming seasons with the Vikings, Mauti has caught on with the Saints over the past two years. The linebacker has compiled 46 tackles and one forced fumble in 24 games (two starts) with New Orleans, and his special teams prowess earned him a role as a captain last season. Mauti will presumably continue to contribute on that unit, as the Saints are currently rostering nine other linebackers.

Despite joining many of his high-first-round peers from 2013 in not living up to their draft statuses, D.J. Hayden signed a one-year, $3.75MM deal from the Lions. He will be looking to bounce back after four inconsistent seasons with the Raiders. His former GM agrees that Hayden needed to go elsewhere.

“I think he probably made a good decision by getting away from Oakland,” Reggie McKenzie told the Detroit Free Press at the NFL owners meetings last week. “Fresh start.”

McKenzie considered making a push to re-sign the former No. 12 overall pick, and per the Free Press’ Dave Birkett, that might have happened if Hayden came at more of a discount. But the sixth-year Raiders GM concluded that if Hayden was going to reach his potential as an NFL corner he would have to leave Oakland. The injuries that dogged Hayden “killed his confidence,” per McKenzie. Hayden played in 16 games just once in his four Raider years, in 2015, and missed the final five games last season. The Lions are expected to give Hayden a quality opportunity to win their slot corner job alongside Darius Slay and Nevin Lawson.

“All he lacked, and it’s hard coming from a near-death situation and being thrown right in and had a couple relapses because of the illness, but he was always playing behind the 8-ball from a physical standpoint,” McKenzie said. “So if he gets that behind him, his confidence will grow. He never, I think in his whole time in Oakland, the confidence for him to really thrive was not where it needed to be.”

Here’s more from around league.

The Rams are receiving “significant interest” as they attempt to trade franchise-tagged cornerback Trumaine Johnson, per Vincent Bonsignore of the Los Angeles Daily News (Twitter link). As of yet, the only club to be directly linked to the Johnson discussions is the Browns, and even that report from Ian Rapoport of NFL.com was seemingly tangential and not indicative of definitive interest. Johnson is set to earn nearly $17MM in 2017 under his second consecutive franchise tender.

Drew Brees does not expect to be playing for a different Saints coach in 2017 despite Sean Payton‘s name again being a constant in the coaching rumors section of the NFL news cycle. The quarterback who signed a one-year extension just before this season “absolutely” expects Payton to stay in New Orleans for what would be his 12th year with the franchise.

“I’ve heard some of the same stuff that I heard last year, and I felt like I had a pretty good feeling last year,” Brees said, via Josh Katzenstein of NOLA.com. “And I don’t see why it would be any different this year.”

Payton has been connected with the Rams after a report emerged indicating the 52-year-old having “sincere interest” in acquiring the veteran coach in a trade. A report pegged the Saints as being open to exploring a Payton trade, with another denying the team was thinking of shopping him. The Saints have made the playoffs just once in the past five seasons, although the 2012 absence came without Payton due to the Bountygate suspension.

Here’s more from the NFC as teams make Week 17 preparations.

The Saints will be without one of their special teams aces for the rest of the season. Nick Underhill of The New Orleans Advocate tweets that the team has placed Michael Mauti on the reserve/non-football injury list. Safety Chris Banjo will be taking Mauti’s spot on the roster, reports Joel Erickson of The Advocate (via Twitter).

Following James Laurinaitis‘ season-ending injury in early November, the team has lost another captain in Mauti. It’s uncertain what ailment landed the 26-year-old on this season-ending list, as the defender showed up on the team’s injury report with an undisclosed illness. The former seventh-round pick has nine tackles and one forced fumble on the season, with the four-year veteran contributing both on special teams and at strong-side linebacker. Defensively, the Saints will likely rely on Sam Barrington, Stephone Anthony, and Nathan Stupar to fill in at linebacker.

Banjo was released by the Packers with an injury settlement in late October after having suffered a hamstring injury. In three-plus seasons in Green Bay, the 26-year-old appeared in 37 games, compiling 38 tackles and three passes defended.