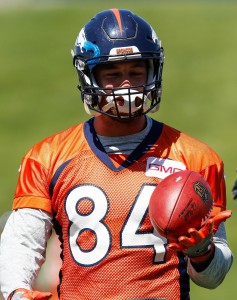 Krieger-Coble missed the Colts’ initial cutdown to a 53-man roster and signed with the team’s practice squad the next day. He was let go on Sept. 26 and went on to audition for the Ravens and Browns, but he went unsigned and remained available for the Colts to re-sign him today. Coble’s on-field experience is limited with just two games and one catch on his resume thanks to his time with the Broncos last year.

The Krieger-Coble signing could be an indication that Jack Doyle‘s status is up in the air following his concussion. On the flip side, he did practice on Thursday, so it’s possible that he could suit up for Week 5 against the 49ers. Brandon Williams and Darrell Daniels are also on the roster if Doyle can’t go. Erik Swoope, who was expected to see some playing time this year, is on IR following arthroscopic knee surgery and is hoping to return before the season is through.

Doyle had five catches for 27 yards before being forced out of last week’s game against the Seahawks. In the previous week, he had just two grabs against the Browns who have been generous with yards for other opposing tight ends. The Colts are hoping to have Doyle back to his healthy and productive ways against SF as he continues to seek his first touchdown of the 2017 season.