The Broncos have signed wide receiver Steven Dunbar Jr., according to an announcement from the team. Dunbar takes the spot of Aaron Burbridge, who retired just before the start of training camp. 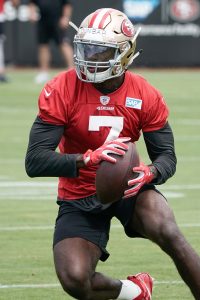 Dunbar signed with the Niners last year after going undrafted out of the University of Houston. He spent the bulk of the year on the practice squad, but was promoted to the varsity squad for the final game of the 2018 season.

Dunbar may be facing an uphill climb on a WR depth chart that also includes Courtland Sutton, Emmanuel Sanders, DaeSean Hamilton, River Cracraft, Tim Patrick, and fifth-rounder Juwann Winfree. Still, Dunbar may have one advantage as an ex-49er who has familiarity with Rich Scangarello‘s system.

The 49ers have announced the signing of the following 13 undrafted college free agents:

McFadden was clearly a high post-draft priority for the 49ers, as the club handed the ex-Seminole largest known guarantee among undrafted free agents league-wide. He’ll receive a $20K signing bonus and a $70K base salary guarantee, according to Tom Pelissero of NFL.com (Twitter link). While each NFL team is allowed to distribute roughly $100K in signing bonus to UDFAs, there is no limit as on base salary guarantees.

McFadden played in 13 games for Florida State in both 2016 and 2017, and earned All-ACC honors during his sophomore campaign. A former five-star recruit, McFadden has a long frame that helps him excel in press coverage, per Lance Zierlein of NFL.com.