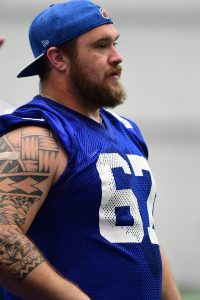 Boehm has played both center and offensive guard throughout his career, a pair of positions that appear to be accounted for on the Giants. Nick Gates and Jonotthan Harrison lead the depth chart at center, while Shane Lemieux and Will Hernandez are in line to start at guard. However, Harrison is currently on the team’s active/PUP list, and Lemieux was carted off the field during Giants practice today. While it was apparent that the 25-year-old suffered some kind of knee injury, we haven’t learned of an official diagnosis, and there’s a chance he could be sidelined for some time.

So, it appears that the Giants are hunting for some reinforcement at the position, even if it’s temporary. Boehm would certainly be a worthy candidate despite his journeyman status. The offensive lineman has spent time with six different teams through five seasons, but he’s also managed to see time in 55 career games (21 starts). That included a 2019 campaign where he started eight of his 13 games for the Dolphins.

The Dolphins are adding another interior offensive lineman. Only a couple hours after trading for guard Danny Isidora, Miami is now making a deal with Indianapolis to acquire center/guard Evan Boehm, according to Adam Schefter of ESPN.com (Twitter link).

Per Schefter, it’s for a conditional pick in the 2020 draft. Boehm was originally drafted by the Cardinals in the fourth-round back in 2016. He was waived just prior to last season, and ended up latching on with the Colts. He appeared in 11 games for Indy, making four starts when normal center Ryan Kelly went down with an injury. In 2017, he started eight games at guard for Arizona, so he has a decent amount of starting experience.

The Dolphins have had interior line troubles for seemingly forever now, so it makes sense why they’re making these minor moves. Boehm has valuable versatility and it wouldn’t be at all surprising if he sees real playing time for Miami given the current state of their offensive line. The Missouri product also spent a brief amount of time on the Rams’ practice squad last year before the Colts signed him.