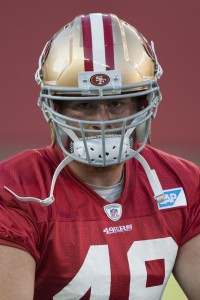 If Anthony Davis returns to football, 49ers line coach Pat Flaherty says that nothing will be given to him, as Matt Maiocco of CSNBayArea.com writes.

As of late May, Davis still hasn’t filed for reinstatement from the NFL’s reserve/retired list. Davis also slammed the Niners via social media this offseason when he tweeted, “I do not want to work with a front office or anyone else who seemingly doesn’t want to win as bad as I do.” If he does come back, Davis will be under 49ers control through the 2019 season.

Davis, 26, was San Francisco’s first-round pick in 2010, coming off the board 11th overall. Prior to his retirement, he started 71 games at right tackle for SF, playing all 16 regular season contests in his first four years before being limited to seven games in 2014. Davis dealt with hamstring and knee issues, and also battled concussion problems, which may have contributed to his decision to step away from the game temporarily in 2015. It remains to be seen whether he’ll try and return for 2016.

Here’s more out of San Francisco:

The Cardinals will have a handful of key contributors eligible for free agency this offseason, and if you ask the players on the roster which of those free-agents-to-be is the most important to re-sign, you won’t necessarily get the same answer. While one Cardinals player suggested to Zach Buchanan of the Arizona Republic that locking up safety Rashad Johnson should be the team’s top priority, another gave his vote to an offensive tackle.

“Bobby [Massie],” the player said. “I thought he had a great year. Whether he stays here or whether he doesn’t, he’s going to get paid a lot of money.”

As we wait to see how the Cardinals approach their offseason, let’s check in on a few more items from out of the NFC West….

You have questions about Kam Chancellor‘s holdout with the Seahawks and Bob Condotta of The Seattle Times has answers. Condotta notes that there is precedent for a player coming back to the team after holding out deep into training camp – former Jaguars star Maurice Jones-Drew held out for 38 days in 2012 before coming back and playing the season. It seems quite possible that the two sides could work something out, but the Seahawks are afraid of setting a dangerous precedent and it is unlikely that the safety will get everything he is asking for. Here’s more out of the West divisions..

In a Q&A with Bob McManaman of The Arizona Republic, Cardinals coach Bruce Arians said that he hasn’t given much thought to the idea of inside linebacker Daryl Washington returning to the team.

“I don’t lose one minute’s sleep or even think about it,” Arians said when asked about where he stands on Washington, who was suspended in 2014 for a drug policy violation and still faces a likely suspension for his domestic violence case. “Until he becomes a Cardinal again, it’s a waste of breath.”

If he is reinstated, however, Arians says that the players want him back in the locker room and he won’t get in the way of that. Here’s more from the NFC West..