The Giants have agreed to a deal with running back Shaun Draughn, agent Sean Stellato tells Adam Schefter of ESPN.com (on Twitter). Terms of the deal are not yet known. Last year, Draughn re-upped with the 49ers on an inexpensive one-year deal. 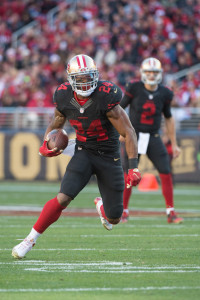 Draughn, 29, appeared in all 16 games for the Niners last year, mainly in a reserve role. He ran for 196 yards off of 74 carries and found the end zone four times. He also added 29 catches for 263 yards and two touchdowns.

The Giants are currently slated to start rising sophomore Paul Perkins with Shane Vereen, Orleans Darkwa, and George Winn in support. The G-Men have been expected to explore running back upgrades and the Draughn signing probably won’t stop them from continuing that search. This year’s draft has a number of talented running backs (especially at the top) and there are a handful of big name backs left in free agency, including Adrian Peterson, LeGarrette Blount, and Jamaal Charles.

Draughn’s defection will leave the 49ers searching for a new reserve to put behind starter Carlos Hyde. The Niners recently had Tim Hightower in for a visit and he could be a candidate for the role. Mike Davis and Raheem Mostert are also under contract.

The Giants are now slated to be the seventh NFL team of Draughn’s career. In addition to the Niners, the running back has previously suited up for the Chiefs, Ravens, Chargers, Browns, and Bears.

The 49ers have reached an agreement with running back Shaun Draughn on a one-year contract, agent Sean Stellato tells Adam Schefter of ESPN.com (Twitter link). The deal comes less than a week after new Niners head coach Chip Kelly said he’d like to re-sign Draughn.

Draughn, 28, started the season with the Browns and finished it on the 49ers’ injured reserve list. In between though, he acted as San Francisco’s feature back for six games when Carlos Hyde was injured. In those six contests, Draughn ran for 263 yards and a touchdown on 76 carries, adding another 175 yards through the air on 25 catches.

While the financial terms of Draughn’s new contract aren’t yet known, a number to keep in mind is $1.671MM — that’s the value of this year’s low-end RFA tender, which the team would have had to assign to the North Carolina product before next Wednesday to keep him from becoming an unrestricted free agent. We’ll have to wait to see how the value of Draughn’s one-year pact compares to that figure.

The 49ers rallied back from a 24-0 deficit against the Bengals to make it look respectable, but they got beaten pretty bad to fall to 4-10 on the season, clinching last place in the NFC West. Without much to root for in San Francisco, here are a few storylines to follow as we come to the final two weeks of the season.

We’ll keep track of the latest injury news here, with the newest updates added to the top of the list…

A look at the latest from a couple of NFC teams: