FRIDAY, 8:34am: The Lions’ contract agreement with Walker has been finalized, with the team announcing the signing in a press release.

THURSDAY, 12:23pm: A year ago, the Lions’ signing of defensive lineman Tyrunn Walker from the Saints was viewed as one of the more solid under-the-radar moves of the offseason. However, Walker’s first year in Detroit came to an early end when he suffered a broken fibula and landed on the team’s injured reserve list in early October. 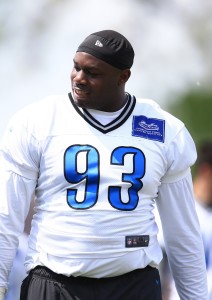 As he recovers from that injury though, Walker is prepared to sign a new contract with the Lions, According to Dave Birkett of the Detroit Free Press, the free agent defensive tackle is en route to Detroit today, where he will take a physical and sign a new one-year deal with the club, assuming some contractual language gets finalized.

After signing a one-year, $1.75MM pact last year, Walker will get a similar deal this time around. Ian Rapoport of NFL.com tweets that Walker’s new one-year contract will be worth $1.6MM, with a chance to max out at $2.25MM. It wouldn’t be surprising if the deal features per-game roster bonuses — because the Tulsa alum only appeared in four contests in 2015, only a quarter of his per-game roster bonuses would count against the cap.

In addition to nearing a contract agreement with Walker, the Lions are in talks to bring back Haloti Ngata, and Birkett expects him to re-sign (Twitter link). As Birkett notes, retaining those two defensive tackles would give the club the flexibility to focus on other positions in free agency next week.

Speaking of free agency, Birkett also reports that the Lions have tendered contract offers to all of their exclusive-rights free agents. The following players have received ERFA tenders, per Birkett:

4:37pm: Twentyman (Twitter link) adds Williams, whose pending deal was noted below, to the list of Lions signees, bringing the total to 12.

3:31pm: The Lions became the latest team to announce a series of reserve/futures signings for 2015 today, confirming that they’ve inked 11 players to new deals. Here’s the complete list of signees, via Tim Twentyman of DetroitLions.com (Twitter links):

Of the 11 players signed today by the Lions, eight finished the season on the team’s practice squad, with Boggs, Cave, and Hyder representing the new additions. Cornerback Trevin Wade and offensive tackle Michael Williams have yet to officially sign new deals, though Williams is expected to re-sign soon, per Michael Rothstein of ESPN.com (via Twitter).

4:03pm: The Pats have announced three more cuts, in a press release:

The team’s official website now lists the team’s active roster at 55 players, so we’ll have to wait and see if there are another pair of announcements today. Presumably, the last two players removed from the roster will be Brandon Browner and Brian Tyms, who will be placed on the reserve-suspended list.

11:42am: The Patriots have released 14 players this afternoon, including a player they acquired only two weeks and a fourth-rounder from 2013. The list is below: