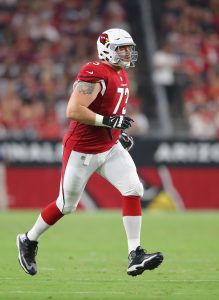 The 28-year-old had six separate stints with the Falcons last season, but the organization continued to turn to him whenever they had a need on the offensive line. The Boston College product ultimately got into a pair of games for Atlanta in 2019. The offensive guard previously started 19 of his 32 games for the Cardinals between the 2016 and 2017 seasons, but he was limited to only eight games (five starts) in 2018.

The organization clearly sees value in Wetzel, so it wouldn’t be a shock if the veteran landed back with the Falcons at some point. It’s worth noting that the lineman was able to sneak in a workout with the Texans between one of his runs in Atlanta.

This will likely be one of many minor moves that the Falcons make as they scrounge around for extra cap. The team’s currently sitting with around $5MM in space, although they could move on from someone like Devonta Freeman to clear up even more room.