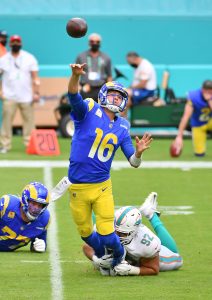 With Matt Skura out for the season, the Ravens gave the Week 13 center snaps to a player without much experience at the position. On Wednesday, they claimed a former starting center, Hroniss Grasu, off waivers from the Titans, Field Yates of ESPN.com tweets.

Patrick Mekari started for Baltimore against San Francisco and played all 65 offensive snaps, but the rookie UDFA out of Cal had not previously started an NFL or college game at center. Grasu provides some insurance.

The former Bears starter has made 13 NFL starts, including one with the Ravens last season, since being a 2015 third-round pick. The Titans waived him earlier this week after not using him in a game this season. The Ravens cut Grasu late last season, leading him to stints with the Dolphins and Titans.