We learned yesterday that the Seahawks and linebacker Bobby Wagner may not have held serious discussions regarding a new contract just yet, and we speculated that if Wagner pushes for a top-of-the-market deal (i.e. $17MM per season), he may be playing elsewhere in 2020. And as Tom Pelissero of the NFL Network tweets, Wagner will indeed be looking to meet or exceed C.J. Mosley‘s new contract with the Jets, and he will not be taking a hometown discount. If that’s the case, it will be difficult for Seattle to retain him.

To make room on their 53-man roster, the Giants waived wide receiver Stacy Coley. Jawill Davis is expected to return kicks for the Giants, Jordan Raanan of ESPN.com tweets.

Mauro played on each of Bettcher’s three Cardinals defenses, starting 24 games during Bettcher’s stay as Arizona’s DC. Although Mauro is more of a run-stopping presence at end (two career sacks), any additional qualified personnel being available stands to help a Giants team that’s again going to be without Olivier Vernon. Afflicted with a troublesome high ankle sprain, Big Blue’s top pass rusher will miss a fifth straight game.

The NFL suspended Mauro four games for violating its policy on performance-enhancing drugs.

New York claimed Coley earlier this year after Minnesota waived the second-year wideout. He returned two kicks and two punts against the Texans in Week 3, but Davis served as the Giants’ kick-return man against the Saints.

Jonathan Stewart‘s tenure with the Giants may not include any more games. The team will place the veteran running back on injured reserve, Jordan Raanan of ESPN.com tweets. 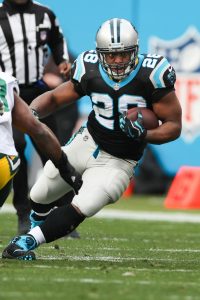 To replace Stewart on the 53-man roster, the Giants will promote wide receiver Jawill Davis from their practice squad, The Athletic’s Dan Duggan tweets.

A foot injury was set to keep Stewart out this weekend against the Saints, and it will shelve the 11th-year veteran for at least two months. However, Stewart doesn’t appear to be an IR-return candidate given his role through thus far.

Stewart’s received just six carries in three Giants games, amassing just 17 rushing yards for his new team. He’s played behind Saquon Barkley and Wayne Gallman. Stewart, 31, is signed for another season with the Giants. He inked a two-year, $6.9MM deal in March, but most of the $2.95MM in guarantees were due this season. It would only cost Big Blue $250K to cut the longtime starter in 2019.

Long the 1-B option alongside DeAngelo Williams with the Panthers, Stewart emerged as Carolina’s top running back for a few years after Williams departed. He started in Super Bowl 50, scoring the Panthers’ only touchdown of that game, and made his only Pro Bowl during that 2015 season. Stewart scored 23 touchdowns over the past three years, but the Panthers released him prior to free agency’s outset.