The Giants are not done spending money on the offensive line. Today, they agreed to terms with offensive lineman John Jerry on a three-year deal worth $10MM, Ian Rapoport of NFL.com tweets. The pact includes $4.25MM guaranteed. 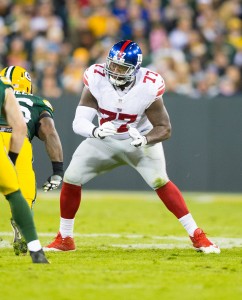 The Giants signed former Chargers offensive lineman D.J. Fluker to a deal over the weekend. Now, Jerry will return to a unit that has lost Marshall Newhouse to the Raiders. Veteran Will Beatty reportedly is not expected to return.

Jerry, 30, started all 16 games for the Giants last season, lining up at right guard. It seems likely that he’ll reprise that role in 2017. The rest of the line, however, remains in flux. It’s not clear where left tackle Ereck Flowers will play and Fluker is not guaranteed a starting job. The only offensive lineman who have secured starting roles, reportedly, are Justin Pugh and Weston Richburg.

The Giants signed former Chargers offensive lineman D.J. Fluker to one-year deal yesterday, but the club is still expected to add more pieces to its front five, as Jordan Raanan of ESPN.com details. 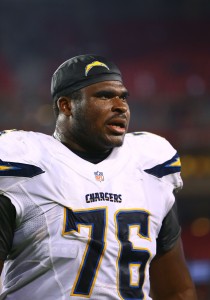 Fluker, who agreed to a pact worth roughly $3MM, is likely to remain at guard rather than shift back to tackle (where he began his career). But Fluker is not guaranteed a starting job, nor is any other Giants offensive lineman outside of Justin Pugh and Weston Richburg, according to Raanan. New York is still considering where to play incumbent left tackle Ereck Flowers, leaving the rest of the line in flux.

Free agent guard John Jerry could return to Big Blue, as Raanan reports the “door is not believed to be closed” on a potential reunion. Jerry, 30, started all 16 games for the Giants last season, lining up at right guard. Elsewhere among internal free agents, New York has already seen Marshall Newhouse sign with Oakland, while Will Beatty is not expected to return, per Raanan.

As PFR’s list of the Top 2017 Offensive Free Agents shows, starting options remain unsigned on the open market. At tackle, Ryan Clady, Austin Pasztor, and Andre Smith are still on the board, while T.J. Lang, Jahri Evans, and Tim Lelito are up for grabs on the interior.