Although Stephen Hauschka kicked in a game earlier this year, he has decided 13 NFL seasons is enough. The veteran kicker announced his retirement Friday (via Instagram).

Best known for his run in Seattle, Hauschka kicked for five teams — the Ravens, Broncos, Seahawks, Bills and Jaguars — and initially landed in the NFL as a Vikings UDFA in 2008. Now 35, Hauschka will call it quits after 166 games.

Hauschka’s six-season Seahawks stay enabled him to kick in two Super Bowls, the first of which earning him a ring, and 11 playoff games. However, his postseason career began in three Ravens playoff games in 2008. Hauschka was not Baltimore’s placekicker in those games, however.

He went a perfect 8-for-8 on field goals during Seattle’s run to Super Bowl XLVIII — including two 40-plus-yarders in the Seahawks’ 23-17 win over the 49ers in the NFC title game — and also made a field goal in Super Bowl XLIX. He only missed one field goal in a playoff game, ending his postseason career 24-for-25 in January and February. Hauschka went 4-for-4 in last season’s Bills-Texans wild-card game. In the regular season, he finishes his career with an 85.2% make rate — 16th all time — with a long of 58 (in 2014).

After two seasons with 90%-plus accuracy on field goals in Seattle, Hauschka signed two Bills contracts — the second of which coming via 2019 extension — and kicked with Buffalo for three seasons. The Bills released the veteran earlier this year, opting to go with rookie Tyler Bass. The Jaguars cut Hauschka after one game this season.

Lambo was placed on injured reserve last week with a hip injury, and the team had rookie Brandon Wright fill in for him on Thursday Night Football. Wright didn’t attempt a field goal and missed one of his two extra points, and the Jags clearly weren’t satisfied. The team worked out Hauschka and former Giants kicker Aldrick Rosas a couple of days ago.

Hauschka was cut by the Bills in August after three years as Buffalo’s kicker. Before that he had spent the previous six seasons in Seattle, winning Super Bowl XLVIII with the team. He was 21-23 from within 50 yards last year, but made just one of his five kicks from beyond 50.

Lambo has been reliable with the Jags, so he’ll probably get his job back whenever he’s healthy enough. The 1-2 Jaguars take on the Bengals on Sunday. 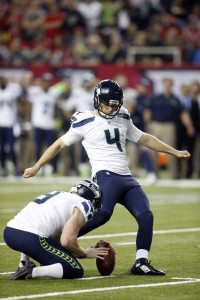 The Bills parted ways with one-time fantasy football hero Stephen Hauschka. With the veteran kicker out of the picture, they’ll turn the job over to Georgia Southern product Tyler Bass.

Hauschka spent the bulk of his career with the Seahawks and had stops with the Ravens and Broncos before landing with the Bills in 2017. In his first Buffalo season, he converted 87.9% of his field goals. Since then, he’s gone 22-of-28 in each of his last two campaigns. Last year, the 35-year-old struggled from deep range, going just 1-for-5 on kicks of 50+ yards. After watching him compete with Bass – a sixth-round pick – the Bills have decided to go in a younger (and cheaper) direction.

By cutting Hauschka, the Bills will save $1.55MM against the 2020 cap while carrying an equal amount as a dead money hit.

Prior to the deal, Hauschka was due to hit free agency after earning $2.25MM in salary and bonuses in 2019. Now, he’s under club control through 2021 and has clear assurance that he’ll beat out Chase McLaughlin for the Bills’ kicking job.

Hauschka spent the bulk of his career with the Seahawks and had stops with the Ravens and Broncos before landing with the Bills in 2017. Since then, he’s nailed 83.6% of his field goals, though last year (78.6%) was a bit rocky.

For his career, Hauschka has converted on 86.4% of his FG tries, including a pair of 93%+ showings in Seattle. His 2018 percentage was a career low, but his new deal may give him the confidence to turn things around.

Cardinals head coach Bruce Arians feels only one 2017 quarterback prospect is ready to play immediately, but he wouldn’t divulge the identity of said player, according to Pat McManamon of ESPN.com. Arizona may be amenable to finding Carson Palmer‘s long-term successor this year, especially after the veteran quarterback flirted with retirement before announcing his intention to return. “It would be one of the best situations for a young quarterback to walk into,” said Arians, noting a youthful signal-caller could sit behind Palmer for a year or two, tweets Ian Rapoport of NFL.com.

Muhammad Wilkerson, who inked a monster extension with the Jets last year, appears to be extremely out of shape, according to multiple scouts who saw him at Temple’s Pro Day (via Manish Mehta of the Daily News). Wilkerson’s listed weight last season was 315 pounds and it’s unclear how heavy he is at the moment. The Jets effectively chose Wilkerson over fellow defensive lineman Sheldon Richardson last year by giving him the long-term deal and, so far, it’s not clear if Wilkerson will reward the Jets for their confidence in him. Last year Wilkerson had just 4.5 sacks, the lowest total since his rookie season. This year, he’s set to carry a $18MM cap number with a fully guaranteed $14.75MM base salary, so a trade is probably out of the question. Meanwhile, Brian Costello of the New York Post (on Twitter) posted a picture of Wilkerson from just last week in which he appears to be in the same shape he was last year.

A bit more from the NFL’s East divisions: