Defensive lineman Muhammad Wilkerson has been arrested for driving while intoxicated, as Mike Garafolo of NFL.com tweets. New Jersey police say he was found with marijuana and drug paraphernalia as well, and he’s facing charges for all of it.

This, unfortunately, isn’t Wilkerson’s first DUI. He was arrested for DUI last offseason too and he never wound up signing with a team. This latest arrest will likely result in a suspension from the NFL and could prove to keep him out of the league once again.

Wilkerson last played with the Packers in 2018 in a season that was shortened by an ankle injury. Despite that, teams had interest in the defensive lineman from a football perspective.

Before that, Wilkerson spent the first seven seasons of his career with the Jets. On his rookie deal, Wilkerson played at a high level. The Jets inked him to a whopping five-year, $86MM extension in 2016, but he never lived up to that deal. The Temple product clashed with coaches and team officials on a routine basis, leading Gang Green to cut ties.

Between the injuries, incidents, and drama, Wilkerson never got back to his old form. In 2015, he tallied 12 sacks and earned a spot in the Pro Bowl. Now, it’s not clear if he’ll ever get a shot at redemption in the NFL. 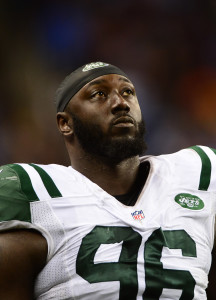 It’s rare that a season-ending ankle surgery produces good news, but that’s exactly what happened for Muhammad Wilkerson. There was some concern that Wilkerson’s injury would affect his football future, but Dr. Robert Anderson has informed him that he’ll make a full recovery, Ian Rapoport of NFL.com tweets.

Wilkerson suffered the fractured ankle in Week 3 against the Redskins and the Packers placed him on IR soon after. The painful injury is undoubtedly frustrating for Wilkerson, especially since he joined Green Bay on a one-year platform contract, but it’s not as bad as it could have been.

Wilkerson registered just five tackles through three games this year, but Pro Football Focus rated him in the top 30 for interior defensive linemen. There should be a market for Wilkerson once he returns to full health, though his next deal will be worth a lot less than the five-year, $86MM extension he inked with the Jets in 2016.

Ideally, teams would like to see Wilkerson get back to the form he exhibited in 2015 when he registered 12 sacks en route to a Pro Bowl selection. Wilkerson’s effort and performance slipped over the next two years, forcing the Jets to release him in spite of costly cap implications.

We learned earlier this week that Packers defensive lineman Muhammad Wilkerson was done for the season after undergoing surgery. Today, the team officially placed the 28-year-old on the injured reserve, according to Packers.com. Cornerback Tony Brown has been promoted from the practice squad to take the open roster spot.

Wilkerson suffered some sort of ankle ailment last Sunday’s contest, and the injury has only been described as “significant.” It’s a tough blow for Wilkerson, who was looking to recoup his free agent value after two straight underwhelming seasons. The veteran signed a one-year, $5MM deal with the Packers this offseason, and he had the ability to make an additional $3MM via incentives. The former first-round pick failed to impress through his first three games with Green Bay, compiling only five tackles. For the time being, the team will have to turn to Dean Lowry to start alongside Mike Daniels.

Wilkerson was once one of the top defensive players in the NFL, but he’s seen a decline in production since inking a lucrative extension with the Jets back in 2016. Wilkerson reportedly had problems with effort, tardiness, and coaches during his last few years in New York. Last year, the lineman appeared in 13 games, but he graded as just the 50th-best interior defender in the league, per Pro Football Focus.

Brown, an undrafted free agent out of the University of Alabama, signed with the Packers’ practice squad after being cut by the Chargers. He was touted for his special teams ability during his time in college.

Packers defensive lineman Muhammad Wilkerson done for the season after undergoing surgery, ESPN.com’s Rob Demovsky tweets. Exact details of the injury and procedure are not known, but it’s enough to shelve him for the year.

The Packers signed Wilkerson to a one-year, $5MM deal in March with the opportunity to earn $3MM in incentives. The terms of the incentives package were not revealed, but it’s unlikely that he has earned much in the way of bonuses after just three games on the field.

Wilkerson was once one of the premier defensive players in the NFL, but he hasn’t been the same since inking a massive extension with the Jets in 2016. Wilkerson reportedly had problems with effort, tardiness, and coaches and his level of play slipped as well. Last year, the 28-year-old (29 in October) appeared in 13 games but graded as just the 50th-best interior defender in the league, per Pro Football Focus. This year, Wilkerson tallied five tackles and zero sacks in three starts at defensive end for Green Bay.

Without Wilkerson, the Packers may promote defensive end Dean Lowry to the starting lineup. They’ll also have to make at one addition to the DE group.

The Falcons have had to do right by a lot of players recently. They’ve doled out extensions to Devonta Freeman and Matt Ryan and still need to lock up Grady Jarrett and Jake Matthews. Ricardo Allen has also been angling for a new deal. On top of all this, star receiver Julio Jones has made clear his unhappiness with his current contract, and held out of mandatory minicamp in protest.

The team recently informed Jones they had no plans to sweeten his deal, which still has three years remaining on it. Jones is looking at it from the wrong perspective, argues Mark Bradley of the Atlanta Journal-Constitution. Bradley thinks that since the Falcons budgeted for the rest of their players under the assumption Jones would play out his deal, it isn’t fair of him to ask the team for a raise. Bradley writes that Jones’ demands are due to “wounded pride” at being the NFL’s seventh-highest paid receiver. It’s unclear how Jones will respond to Atlanta’s refusal, but the team certainly doesn’t want its best player this unhappy. It wouldn’t be surprising if the two sides come to some sort of agreement on additional incentives or some other measure that will satisfy Jones.