The Broncos have released wide receiver Andre Holmes, according to ESPN.com’s Field Yates (on Twitter). The veteran was acquired late in the season via waivers from Buffalo, but his time with Denver is through.

Claimed off waivers just after Emmanuel Sanders tore one of his Achilles’ tendons, Holmes caught one pass during his Broncos tenure. The wide receiver was under contract through 2019, but his deal had no additional guaranteed money left for next season.

Prior to being released by the Bills in early December, Holmes had 12 catches for 157 yards on the season. Even though he had history with then-offensive coordinator Bill Musgrave, he didn’t do a whole lot with the Broncos. After catching his lone target for five yards, Holmes wound up on IR to close out the year.

Holmes’ best ball came in Oakland, including a 2014 season in which he caught 47 passes for 693 yards and four touchdowns. Since then, he’s been much more of a role player and has not amassed more than 14 grabs in a season.

Before he signed with a one-year, $8MM deal with the Vikings in March, defensive tackle Sheldon Richardson received a $4-5MM offer to stay with the Seahawks, as he explained to Chris Tomasson of the Pioneer Press (Twitter link). “The contract they offered me was terrible. It wasn’t what they told me when I left after the exit meetings,” Richardson said. “When my agent told me the offer, I told him, ‘They can keep that.’” Richardson has excelled for Minnesota this season: Pro Football Focus currently grades him as the league’s No. 36 interior defender, while Richardson is tied for sixth among defensive tackles with 14 quarterback hits. Given that he only inked a one-year pact, Richardson will be able to hit the free agent market again in 2019 at the age of 28.

The Broncos claimed wide receiver Andre Holmes off waivers, as Ian Rapoport of NFL.com tweets. The Broncos will turn to Holmes for receiving help after the loss of Emmanuel Sanders to an unfortunate Achilles injury.

Prior to being released by the Bills on Tuesday, Holmes had 12 catches for 157 yards on the season. He’ll have to quickly get familiar with his new team, but his time with offensive coordinator Bill Musgrave in Oakland should help.

Holmes played his best football in Oakland, including a 2014 season in which he caught 47 passes for 693 yards and four touchdowns. Since then, he’s been much more of a role player and has not amassed more than 14 grabs in a season. But, in Denver, he may have a chance to shine now that Sanders is out of action and Demaryius Thomas is in Houston.

Holmes will have an opportunity to make his Broncos debut on Sunday against the Niners. 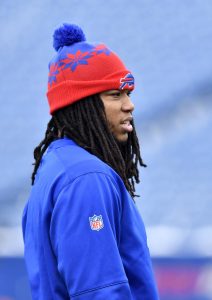 While the Vikings made contact with free agent Andre Holmes before he signed with the Bills, Minnesota “never got serious” about inking the veteran pass-catcher, tweets Darren Wolfson of 1500 ESPN. The Lions had also been mentioned as a potential suitor for Holmes (and even had him in for a visit), but Detroit likely bowed out because Anquan Boldin may re-sign for the 2017 campaign, according to Dave Birkett of the Detroit Free Press (Twitter link). 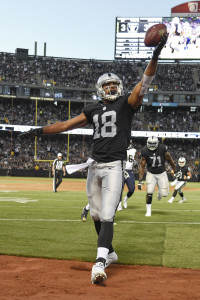