The Jets interviewed Marvin Lewis for their head coaching vacancy on Thursday, per a club announcement. This marks’ Lewis third interview, following chats with the Texans and Lions. 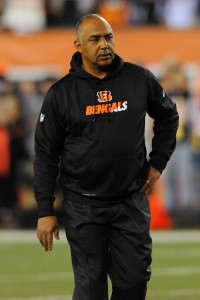 Lewis is best known for his time as the Bengals’ head coach and the Ravens’ defensive coordinator before that. His most recent stop was in Arizona State, where he served as the co-DC under one-time Jets HC Herman Edwards.

Lewis’ career 131-122-3 regular season record doesn’t get fans too excited, nor does 0-7 playoff record. Still, his Bengals teams won the AFC North four times, and he remains a well-respected defensive mind. The Jets are at least interested in the experienced head coach, though they’re also willing to consider an up-and-comer like Aaron Glenn. In addition to Lewis and their longtime cornerback, 49ers defensive coordinator Robert Saleh, Bills offensive coordinator Brian Daboll, and Titans offensive coordinator Arthur Smith are also among those on the radar.

None of the candidates will be directly interviewed by owner Woody Johnson, though he will reportedly be kept in the loop.

Thus far, the Lions’ GM search has generated more headlines than their hunt for a new head coach, but their HC pursuit will soon kick into high gear. Detroit started that process by interviewing longtime Bengals HC Marvin Lewis several days ago, as Ian Rapoport, Tom Pelissero, and Mike Garafolo of NFL.com report.

Lewis interviewed with the Texans for their HC vacancy last month, so the 62-year-old appears to be firmly back on the NFL radar. He currently serves as the co-defensive coordinator on Herm Edwards‘ staff at Arizona State.

The defensive acumen that he displayed while working as the Ravens’ DC from 1996-01 helped Lewis secure the Cincinnati gig in 2003, a position he held for 16 seasons. Though his 0-7 record in the postseason has garnered plenty of attention and ultimately contributed to Lewis’ ouster, the fact that he got the formerly moribund Bengals to the playoffs seven times during his tenure was in and of itself a major accomplishment.

Detroit is considering a wide variety of candidates for its HC post. Robert Saleh, the current 49ers defensive coordinator, is said to be high atop the team’s wish-list, but the Lions are also considering offensive-minded coaches. Chiefs offensive coordinator and hot commodity Eric Bieniemy is a target, as is Titans OC Arthur Smith.

Peter Schrager of the NFL Network reports that Saleh, Bieniemy, and interim HC Darrell Bevell are expected to interview this week (Twitter link).

On this date in 2018, Cincinnati fans weren’t too high on Marvin Lewis. The Bengals head coach had just missed the postseason for the second-straight season, but it’s not like anyone would have had much faith in the team had they found a way to sneak into the playoffs. After all, Lewis had (and still has) his infamous 0-7 playoff record, with the head coach guiding the organization to first-round exits every year between the 2011 and 2015 campaigns.

So, with the team having only won 13 combined games between the 2016 and 2017 seasons, it only seemed natural to move on from Lewis, right? Nah. Instead, on January 2nd, 2018, the Bengals signed Lewis to a two-year extension that would last through the 2019 campaign. As an aside, Lewis had traditionally inked one-year extensions with the organization, so the two-year pact was met with plenty of ire.

A Bleacher Report article said the extension was a “commitment to mediocrity,” while Will Brinson of CBS Sports described the move as “stunning.” If you want a take on fan reactions, you can check out the comments section of our own article.

Lewis and the organization didn’t do much to calm fans’ nerves when discussing the extension. The coach acknowledged that he probably would have been fired in any other city (per USA Today), while Bengals President Mike Brown admitted that the team had recently “fallen short of our expectations.”

“My job is to win a World Championship,” Lewis said in a statement that day. “We have a talented roster full of veteran leaders and emerging young stars, and I am committed to making the necessary improvements to put this team in the best position to win.”

Critics of the extension were punching air through the five weeks of the 2018 season. With Lewis serving as the second longest-tenured head coach in the NFL (behind Bill Belichick), the Bengals held the top spot in the AFC North with a 4-1 record, and they entered their bye week at 5-3. Then the wheels fell off. The Bengals dropped five consecutive contests and finished the season with a 6-10 record. Raise your hand if you know what happened next. The Bengals and Lewis decided to mutually part ways with a year remaining on the coach’s contract.

Cincinnati bottomed out in 2019 with new head coach Zac Taylor at the helm, allowing them to snag Joe Burrow with the top pick. Lewis hasn’t really committed to returning to the NFL, but he’s still been connected to a number of openings. Over the past few years, Lewis has been linked to head coaching gigs in Washington and Dallas, and he interviewed for the lead position with the Texans in late December. The 62-year-old has been on the Arizona State coaching staff for the past two seasons.

When the extensions was signed three years ago today, Lewis and the Bengals organization probably weren’t envisioning their present-day status. Everyone else? I think we all saw this coming.

Expected to have a chance at multiple NFL HC jobs, Marvin Lewis landed his first known interview of this hiring period. The former Bengals head coach interviewed for the Texans’ HC position, Ian Rapoport and Mike Garafolo of NFL.com report (via Twitter). The Texans announced the interview took place.

The longest-tenured HC in Bengals history, Lewis has been with the Arizona State program for the past two seasons. But he is on multiple NFL teams’ radars, and several jobs figure to be open by season’s end.

Currently the Sun Devils’ co-defensive coordinator on Herm Edwards‘ staff, Lewis surfaced on the NFL radar — to some degree — last year upon meeting with the Cowboys about the job that went to Mike McCarthy. Mike Zimmer also offered his former boss an assistant job in 2019. But a genuine Lewis push back to an NFL coaching gig now appears on tap.

Lewis, 62, coached the Bengals for 16 seasons. Known for revitalizing a long-moribund franchise in the 2000s, Lewis failed to snap Cincinnati’s playoff win drought — twice losing opening-round games to the Texans — and surprised most with his job security at his last NFL post. The former Ravens defensive coordinator is 131-122-3 as an NFL head coach.

The Texans have already interviewed former Lions and Colts HC Jim Caldwell for the job and have been connected to Seahawks OC Brian Schottenheimer as well. Eric Bieniemy, however, has loomed as a Deshaun Watson favorite — though, the quarterback is also believed to want OC Tim Kelly to stay — and has appeared to be on Houston’s radar for several weeks. Lewis has far more HC experience than both and has more such service time than almost anyone currently coaching in the NFL. It will be interesting to see how many interviews the current Pac-12 assistant lands over the next few weeks.

The Panthers made a big splash Monday by firing GM Marty Hurney. Although the timing was interesting since Carolina’s season will be over in just a couple of weeks, it wasn’t the result of any sudden developments or changes. The move had apparently been in the works for a while, as Albert Breer of SI.com was told that Hurney was in the final year of his contract and that he and owner David Tepper had been talking about an exit for weeks now (Twitter link). Breer adds that the analytics-minded Tepper wants to “modernize” the personnel side. As for names to keep an eye on for the now vacant role, Breer tweets that 49ers VP of player personnel Adam Peters is one to watch. Peters played for Panthers head coach Matt Rhule back when Rhule was the defensive line coach at UCLA.

It sounds like Tepper knows more or less what he wants, and accordingly the relatively new owner told the media on Monday he won’t be using an outside search firm like some teams for the GM opening. To clarify on the modernization, David Newton of ESPN.com reiterates that the Panthers will look for a new GM who “is driven by data and analytics, characteristics that didn’t define” Hurney. Carolina seems to have found their coach of the future with Rhule but they’ve still got plenty of questions to address moving forward, like whether or not Teddy Bridgewater is the long-term answer under center. Who they hire here should tell us a lot about the direction they plan to take.

Now that we’ve broken down most of the Hurney fallout, let’s pivot to the rest of the front office and coaching staff talk around the league:

The Adam Gase–Gregg Williams arranged marriage dissolved at the 11th hour, after the defensive coordinator’s bizarre final-seconds play call ended up keeping the Jets winless. To some degree, Gase had soured on the polarizing DC earlier this season. The second-year Gang Green head coach “fumed” after Williams’ indirect shot at the Jets’ offense, Rich Cimini of ESPN.com notes, adding that the soon-to-be-fired HC was upset Williams voiced frustration in that manner. In a split setup in which Gase ran the offense and Williams oversaw the defense, Cimini adds Gase would learn of Williams’ defensive lineup changes on Fridays before games on certain occasions. This regime’s issues may cause the Jets to re-evaluate how they pair coaches next year.